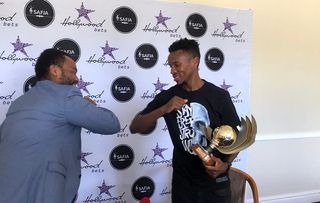 Safja is a newly-formed organisation aiming to give football writers in the country a unified voice. The organisation currently has 108 members, all of whom voted for the award winner.

The organisation is looking to follow in the footsteps of many established journalists’ bodies worldwide, including the Football Writers’ Association in England, who named Liverpool’s Jordan Henderson the player of the year for 2019-20.

Zwane was a key contributor as his side went on to dominate all that was in front of them during the 2019-20 season, winning the final edition of the Absa Premiership, the Telkom Knockout and the Nedbank Cup to bank a historical treble.

[email protected]’s Themba Zwane is the winner of the inaugural Safja Men’s Footballer of the Season. #SafjaAwards pic.twitter.com/mJz53h1PnZSeptember 29, 2020

The Bafana Bafana star played 41 games across all competitions scoring 14 goals, while also providing 12 assists. His contributions, though, also came at vital times for the Brazilians and were instrumental in their chasing down Kaizer Chiefs at the final stretch.

These awards could arguably have had a different outcome if Samir Nurkovic, who scored 14 goals and picked up six assists, had fired the Glamour Boys to the league title. The same could have been said of Lebogang Manyama, who struggled upon the restart and would have had a strong case if he had driven his team to glory.

Kekana was the bridesmaid yet again in an awards ceremony. While he also played a vital part in Masadawana’s treble he could not edge his teammate to the award.

Shalulile, who won the Golden Boot award and picked up 19 goals in all competitions, shone for a less-fancied side in the now sold Highlands Park but, again, Zwane’s championship haul proved decisive.