Fans in Qatar who wanted to experience Sunday’s opener in the way many traditionally celebrate World Cups — with alcohol in groups with other fans — had two choices in the conservative, Muslim country.

They could head to FIFA’s official fan festival, which organisers advertised as the place to enjoy sponsor Budweiser’s beer after reversing course two days before Sunday’s opener and banning alcohol sales at the stadiums. Or they could head to one of Qatar’s few bars aimed at westerners, which are licenced to sell alcohol.

To see how fans experienced Sunday’s opener first-hand, ESPN sent two reporters out into the field to explore both options. 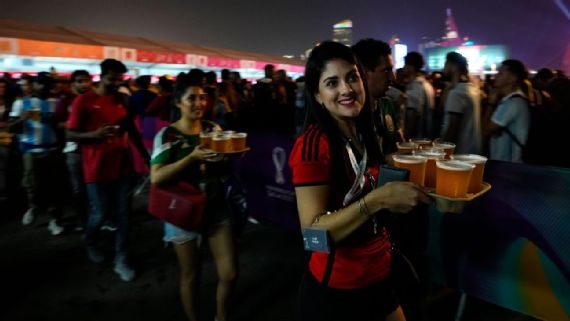 Mark Ogden went in search of what were rumoured to be the most expensive beers in Qatar, and he ended up at the Marriott Marquis Hotel to find out if pints were really $92, as the internet had claimed. Tom Hamilton went to the FIFA’s official fan festival in Doha, where organisers didn’t seem prepared for the amount of fans wanting to get in, and then the party was nearly over by halftime anyway.

This is the tale of two fan experiences at the World Cup in Qatar on opening day.

A western experience in Doha at the Marriott (by Mark Ogden) 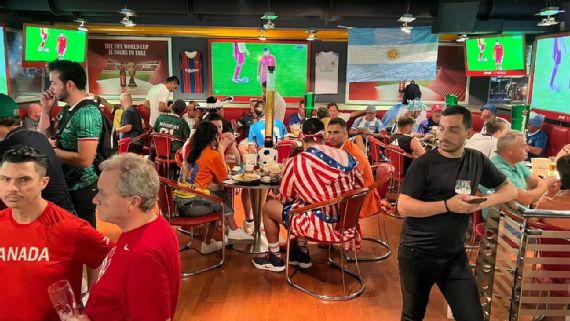 During the early days of Russia 2018, football fans from all over almost drank Moscow dry. Several bars and drinking areas in the Russian capital ran out of beer within a week of the World Cup starting. Why? Because football supporters like a beer (or two) before, during and after a game, and even a city as big as Moscow struggled to cope with demand.

Four years on, it is a very different story in Qatar. As a Muslim country that restricts alcohol consumption, the usual football fan experience was always going to be a challenge during this World Cup. That’s even more true since the Qatari authorities banned the sale of beer at stadiums hosting games at Qatar 2022 just two days before the tournament was due to start.

Fans who still want a beer have been left with two options: drink expensive alcohol at FIFA’s sanctioned fan zones (and endure lengthy queues for the privilege of doing so), or find a hotel with a bar that has a license to sell beer.

Prior the start of Qatar 2022, one bar was given the dubious distinction of offering the most expensive pint anywhere in the country — and probably the world — amid unsubstantiated claims that it would be charging $92 for a beer during the World Cup.

So, with hosts Qatar facing Ecuador in the opening game, ESPN headed to that bar — Champions Sports Bar in the Marriott Marquis Hotel — to discover whether it was really charging $92 for a beer and what kind of atmosphere you could experience among fans from all over the world.

First things first: The beer didn’t cost $92 per pint, although any fans prepared to spend 369 Qatari riyals ($102 or £85) could buy a huge serve-yourself six-pint Heineken container with its own tap, which allowed them to top up their glasses at any time. A straightforward pint of Heineken or Budweiser cost 60 riyals ($16.50 or £14) each, while a half a rack of ribs would set you back 215 riyals ($59 or £49).

But despite the exorbitant prices, Champions Sports Bar, which has at least 40 screens showing the game, was packed and it told you two things: that football fans really do like to drink while watching the game, but also that football is a unifying force in a much more organic way than FIFA president Gianni Infantino could ever make it with his grand claims of taking tournaments to Iran or North Korea.

On Sunday to watch the tournament opener, there were supporters from Argentina, Australia, United States, Wales, England, the Netherlands, Mexico, Canada, Germany, Poland, Morocco, Ecuador, Brazil and Iran in the small space in Champions Bar. Within that group of nations, there are some pretty deep-rooted football rivalries and some which extend beyond the sport and into all levels of hostility — but at a World Cup, it becomes a melting pot.

Argentina supporters were the loudest and most boisterous, singing their national anthem and songs about Lionel Messi and Diego Maradona, but the Welsh fans joined in with their own tribute to Gareth Bale. American fans loudly chanted “USA, USA,” while England supporters responded to Argentinian songs with chants of their own.

Iranians hugged Welshmen, Americans sat with the Dutch and Aussies shared tables with England fans. And they were all drinking expensive beer while doing so.

There were three England fans from Stoke, hoping to get a ticket to an England game, but prepared to watch any fixture they can get into, while one Wales fan, who admitted to being born and raised in England, said he had fallen in love with travelling with the Welsh after watching their run to the Euro 2016 semifinals in France.

And there was U.S. fan Daniel from Nebraska who had just landed in Doha and decided to try out the bar after finding the queues too long and stressful at the fan festival.

All the fans spending Sunday at Champions Sports Bar had similar stories and different backgrounds, but each wanted to watch the game with a beer.

Another element which appeared to unite the fans watching the omnipresent screens was the support of Ecuador, rather than Qatar.

When Enner Valencia scored in the third minute to give Ecuador the lead, his goal was greeted with prolonged cheers, followed by loud boos when it was disallowed for offside following a VAR check. But when Valencia scored from the penalty spot 13 minutes later being brought down by goalkeeper Saad Al Sheeb, the support for Ecuador inside this Marriott bar was loud and clear.

There will be many different reasons for that — the alcohol ban at games, the cost of travel to and accommodation in Qatar and a general sense that the tournament should not be being staged in this tiny country for several concerns that have nothing to do with football.

But while FIFA and Infantino talk about themselves being a force for good in football, the reality was borne out in a bar in Doha — it’s the fans that make the game, not the administrators or the regimes who win the race to host football’s biggest tournament. 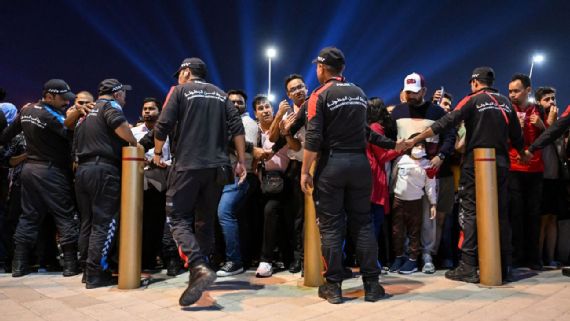 About an hour and a half or so before kickoff, as Morgan Freeman was delivering his eulogy on world equality, those inside the FIFA Fan Festival at Al Bidda hung on his every word. Phones were filming the moment. Local families stood together as the World Cup officially began, all making an effort to remember the feelings and emotions they experienced in that very place. The fan park was already packed.

A couple of hundred metres away, the other side of the barriers and security gates, thousands were trying to join the party. But it was disorderly.

Crowds surged forward trying to shoehorn their way to the front of the queue. Security services seemed, at times, overwhelmed. One volunteer was asking those with the wrong pass for the hospitality entrance to move back as children were crying at the front. The surges of crowd pressure saw guards physically push back the visitors.

It felt claustrophobic, and there were some panicking. One England supporter, Stu, later told ESPN about the bruises he sustained as he was forced up against the barriers. “That wasn’t fun,” he said.

Eventually the numbers got to such a weight of pressure the area was shut down. Visitors were turned away, the road blocked, the metro station exit shut. Those inside who had arrived early were unaware of the chaos outside. They were enthralled by the opening ceremony, and were daring to dream about their respective nation’s possible success.

There was plenty of support for Qatar, with those crimson jerseys outnumbering the plentiful shirts from Argentina, Morocco, Tunisia and Brazil. There were a few supporting Ecuador too — those who had arrived too late to get tickets for the match.

Each of the fans inside had their own reasons to be there. A group of five Qatar supporters moved to the country in the last decade, having been brought up in Persia and Jordan. By halftime, they had taken full advantage of the 50 Qatari riyals ($13.73) Budweiser on sale.Though beers are not available inside the stadiums on matchday, they are on sale in the fan zone. The stations selling them are discreet — hidden away in the corners of the park, rather than front and centre like the other sponsor activations. While non-alcoholic beer was readily available, the punchier kind was only available to buy once the match had kicked off. At kickoff, the barriers were opened and once the fans were allowed into the zigzag arrangement to get to the beer, they were able to walk away with a pint after 10 minutes of queuing.

Half an hour before the match started and the master of ceremonies on stage was entertaining the crowd by playing off two Qatari fans against two Ecuador supporters, there was already a huge queue waiting to purchase a beer. A Dutch fan named Laurens had cycled to Doha from Utrecht, blogging about the experience on his website. Elsewhere a group of Iranian fans were dancing, each wearing various T-shirts with messages of gender equality.

The loudest cheer pre-match from the local supporters was the speech from the Emir Tamim bin Hamad Al Thani, and the sight of his father, Hamad bin Khalifa. Some local fans told ESPN they never thought the moment would arrive, fearing the tournament would have been taken off Qatar in the 12-year wait from when it was originally awarded to this part of the world. But now it was here. “This means everything” said one father as he held his young, sleeping daughter against his shoulder. Another introduced his son Mohamed. “Like Salah, he’s named after him,” he said. He too was from Egypt and moved to Doha to teach.

The Qatar team were clear underdogs against Ecuador in Sunday’s opener, but still there was that feeling of eager anticipation among fans. That was, until Ecuador scored in the third minute. There were various, small chants of “VAR, VAR, VAR” and protests of offside. Such hopes were for naught, though as Ecuador dominated the first half and went into the break up, 2-0.

The crowd inside the fan zone dwindled by during the break with the doors opened and stewards directing supporters away from the area and towards metros north and south. Some decided to stay sitting on the ground.

One Wales fan was looking forward to his side’s match on Monday and had decided to come into the festival to experience the atmosphere. He’s staying up in the fan village, in one of the cabins. He spoke about how he was put out by the 100 riyals charge there to watch one of the matches on the installed big screen. That would get you access to the screen, and a meal and a soft drink. Even if you didn’t want the refreshments, you still needed to pay the full price. It didn’t sit right.

As the match drifted away from the hosts, the fan park emptied. Some stayed to drink into the evening, but the majority left. Supporters and tourists tried to navigate their way home. Even a few thousand left inside and far short of capacity, the megaphones held by various security guards were playing the versions of the same message on repeat — the equivalent of: this area is full, go elsewhere. The World Cup was off and running.

For some it would be a night they’d never forget — the start of a four-week festival of football to mark the end to a 12-year wait. But for others it would’ve been a stressful experience, one which should have been prevented by better planning.