Doha, Qatar – As Qatar prepares for a must-win second match of the World Cup on home soil, the Al Annabi fans are rallying behind the team with hopes and expectations.

Qatar opened the tournament with a 2-0 defeat against Ecuador on Sunday. They now face Senegal in its second match of Group A on Friday.

A loss on Friday will put Qatar out of the running for a place in the round of 16. However, despite the task on hand, fans have come out in support of the home team.

“We don’t want to bring them under any pressure that they must win, we just want them to have a good game,” Ali Ghanem, a teenage fan of the home team, told Al Jazeera.

Qatar, one of the lowest-ranked teams in the tournament, is making its World Cup debut by virtue of being the host.

Despite being the current Asian champions and having improved their rankings in the last few years, Al Annabi have been unable to cope with the pressure the tournament brings.

While captain Hassan Al-Haydos, Akram Afif, Saad Al-Sheeb and Almoez Ali may be household names in the Gulf state, none of them has played club football outside Qatar and are relatively unknown to the outside world.

According to Amine, a Tunisian fan, having the world’s eyes on them for the first time made the team nervous.

“It was a historic moment for them. Now, with the first match gone, Qatari people should let the team go and enjoy themselves instead of expecting them to win,” he said. 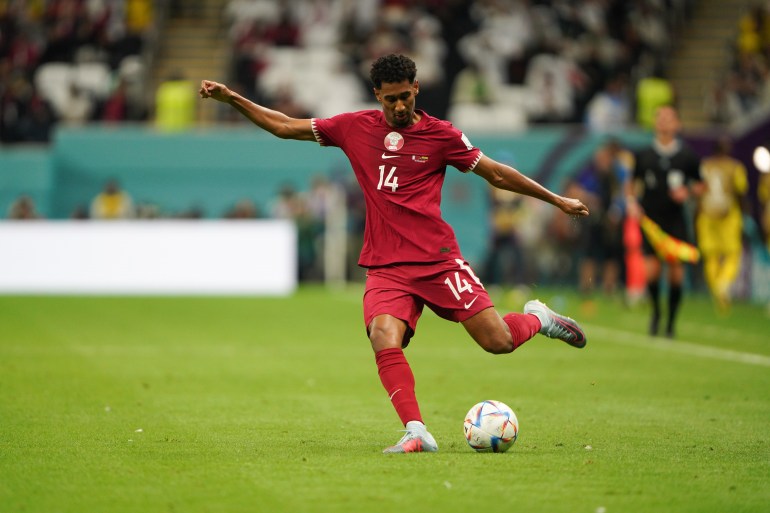 Ismaeel Mohammad, a Qatari team member, called on the fans to get behind the team.

“Our team needs its fans now more than ever,” he said during a news conference on the eve of the match.

Fans duly obliged and turned out to support their team in Doha’s Musheireb area on Thursday evening. They walked down to the Al Annabi Village, a fan zone for Qatar’s supporters at Musheireb, with their maroon and white Qatar flags.

Large video screens at the fan zone showed the team’s achievements at the Asian Cup and the Arab Cup as fans sang along to popular songs.

“We hope that now we are free from all this pressure that we had in the opening match,” he told reporters on Thursday.

“I hope we can compete and show that we can be more competitive than the other day, regardless of what is the result.”

If Qatar fails to win, it will become only the second host nation after South Africa (2010) to crash out at the first hurdle.

The team said it will try to take inspiration from Saudi Arabia, which beat Argentina 2-1 in their opening match as well as the other Arab teams who have done well in the tournament.

Sonia Nemmas, a Jordanian mother of three football-mad girls, said her family has always supported Qatar and has high hopes for the team.

“If they manage to get at least one win and one draw from the remaining two matches, we may still [have] a miracle,” she said.

Nemmas thinks Akram Afif and AbdelKarim Hassan will be the stand-out players for Qatar.

“Even if they manage to come away from the group stage with a point, we will be happy.”