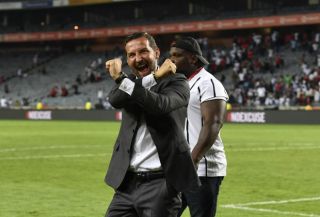 The Soweto giants finished the 2019-20 Absa Premiership campaign in third place after securing a narrow 1-0 victory over Stellenbosch FC at the Emirates Airline Park on Saturday.

A solitary goal from Gabadinho Mhango meant the Buccaneers joined champions Mamelodi Sundowns and Kaizer Chiefs in securing their spot in the continental competition for next season.

‘Compliments to the team, we have now 17 games and 35 points – that’s more than two points per game, that’s a top result,’ Zinnbauer told the media.

‘Yeah, I’m happy now for the club that we stayed in third place, we can now go to Africa, which was a target we did not have before [the game] but we have it now.

‘Now the focus for me is on next season, we come back to the performance we saw before and not what we have now [during the bubble].’