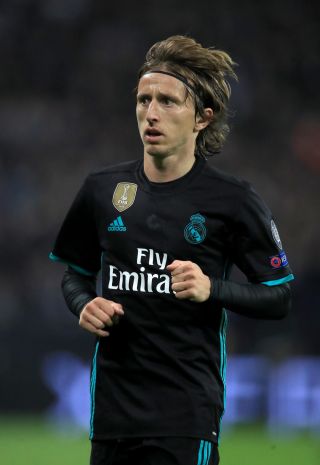 Zinedine Zidane admits there is not much Real Madrid can do but press on without Luka Modric after the midfielder suffered an injury over the international break.

The Croatian has been diagnosed with a thigh adductor muscle problem suffered while away, having played in both Euro 2020 qualifiers and scoring during the 1-1 draw in Azerbaijan.

No time-frame has yet been given for Modric’s expected return, but the 34-year-old will miss the LaLiga match against Levante – and could also be doubtful for the Champions League opener against Paris St Germain on September 18.

With Isco also sidelined, James Rodriguez looks set to start when Real resume domestic action on Saturday, while playmaker Eden Hazard could be handed his debut if considered fit enough.

“I was not there with him, but I think everyone tries the best for the players,” Zidane said at a press conference when asked about how Modric’s workload had been managed while on international duty.

“Luka has had two games in three days and now we can’t think about that anymore.

“I hope Luka recovers quickly for us. He is injured, cannot play tomorrow and we must accept that. We are without Modric but there are also some players who are coming back in.

“The squad is what we have got, there are no more changes and we have got a lot of players. Everyone will have their chance to contribute to the team.

“Injuries happens to every club, especially at the beginning of the season. We have lot of players who never stop because they are internationals.

“We work well and I trust the people who work here, they are the best, but injuries happen. I hope that after Luka we don’t have more injured players, but it could happen.”

Hazard has been working on his own match fitness after a hamstring problem, but Zidane will not take any risks with the Belgian following an £89million summer switch from Chelsea.

“We have to take it easy with him. He’s been injured for three weeks and has returned to full training a week ago,” he said.

Great character shown by the boys tonight. Disappointed to get sent off late on but we go again after the international break! #HalaMadridpic.twitter.com/SzYzCVl8UI— Gareth Bale (@GarethBale11) September 1, 2019

“We all really want to see him, but there are a lot of matches and we don’t want to rush it.

“There is expectation, he’s prepared and I’ll be the one to decide how many minutes he plays. We have to take it easy, but everyone is ready, especially him.”

Wales forward Gareth Bale, though, will be suspended for the Levante match after he was sent off in the draw at Villarreal, where he scored both goals in the 2-2 draw.

Zidane wants to draw a line under the summer transfer saga which ended with Bale still at the club.

The #LaLigaSantander table ahead of this weekend…— LaLiga (@LaLigaEN) September 13, 2019

“He is happy now and so am I. We have to pull forward now,” the Frenchman said.

“Gareth is one of my players and it’s my philosophy to believe in all of my players. We are all guilty of the things we do right and wrong. We are in the same boat.”

Real Madrid have drawn both LaLiga games since winning 3-1 at Celta Vigo in their opener.

Zidane said: “The criticism from outside will not change. What we want to change is the results of the matches, getting more wins.

“We want to give everything and do our talking on the field. We now have a lot of matches to prove it.”