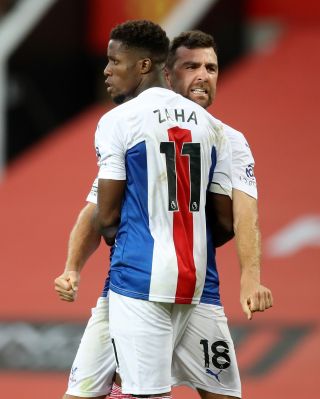 Andros Townsend punished poor defending to give the Eagles a seventh-minute lead at Old Trafford, and they extended it in the 74th minute courtesy of a Zaha penalty.

Palace were awarded a spot-kick after referee Martin Atkinson used the pitchside monitor to rule that Victor Lindelof had handled.

Jordan Ayew’s initial effort from 12 yards was saved by David De Gea, but the Spaniard was adjudged to have come off his line and Zaha subsequently made no mistake with the retake.

Donny Van De Beek, having come off the bench for his United debut, reduced the deficit six minutes later, before Zaha fired in again in the 85th minute.

Palace have two wins from two matches, and the same applies to Arsenal after substitute Eddie Nketiah’s late goal secured them a 2-1 home win over West Ham.

Nketiah restored Arsenal’s lead with a tap-in in the 85th minute, after Alexandre Lacazette’s 25th-minute header had been cancelled out by Michail Antonio’s finish moments before half-time.

Dominic Calvert-Lewin scored a hat-trick and James Rodriguez marked his home debut with a goal as Everton – also now with six points and top of the table – thrashed 10-man West Brom 5-2 at Goodison Park.

After falling behind early on following a superb Grady Diangana goal, the hosts equalised around the half-hour mark through Calvert-Lewin’s back-heeled effort, with an initial offside flag overruled by VAR. They then took the lead just before the interval when Rodriguez struck past Sam Johnstone.

Moments later, Albion had Kieran Gibbs sent off after he put his hand in Rodriguez’s face, and Baggies boss Slaven Bilic was then also dismissed by referee Mike Dean as he remonstrated with the official.

West Brom were back level just two minutes into the second half thanks to Matheus Pereira’s free-kick, but Michael Keane put Everton in front again shortly afterwards and Calvert-Lewin then added efforts in the 62nd and 66th minutes to complete his treble.

There was also seven goals at Elland Road, where Leeds recorded the first win of their Premier League return as they beat fellow promoted side Fulham 4-3.

Helder Costa put Marcelo Bielsa’s men – who lost 4-3 at Liverpool last weekend – ahead in the fifth minute before Aleksandar Mitrovic levelled with a 34th-minute penalty.

Another spot-kick, from Mateusz Klich, saw Leeds regain the advantage in the 41st minute, and further efforts from Patrick Bamford and Costa had them 4-1 up before the hour.

Fulham hit back with a Bobby Decordova-Reid strike and Mitrovic header, but were unable to save themselves from defeat.