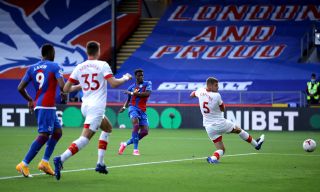 Wilfried Zaha put speculation about his future behind him to fire Crystal Palace to an opening-day victory over Southampton.

The winger needed 13 games to get off the mark last season, but achieved the feat after only 13 minutes at Selhurst Park and it was enough to give Roy Hodgson’s men a 1-0 win.

Vicente Guaita’s excellent close-range save from Che Adams in the 53rd minute was the closest Southampton went with Danny Ings nullified by a makeshift Palace defence due to the Eagles missing seven first-teamers.

It could have been worse for the visitors had referee Jonathan Moss not downgraded his decision to send off Kyle Walker-Peters at the start of the second half, but despite keeping 11 players on the pitch, Ralph Hasenhuttl’s side failed to fire in the capital.

Hodgson resisted the temptation to start new signings Ebere Eze and Michy Batshuayi after both had hardly featured in pre-season and named them on the bench.

Southampton, who were one of the form teams once football resumed last season, were without Stuart Armstrong and it offered Will Smallbone an opportunity.

It was the Saints who started strongest and dictated possession, but they conceded after 13 minutes.

James McCarthy won possession and released Andros Townsend down the right and he was able to produce a telling cross to Zaha at the back post.

With Southampton’s full-backs caught up the pitch, the Ivory Coast international side-footed home from eight yards past Alex McCarthy to open his account for the season.

Scott Dann was Palace’s only recognised centre-back in the XI due to injuries and he almost made it 2-0 with a header from James McCarthy’s corner after 26 minutes but Saints’ goalkeeper saved well to his left.

Hasenhuttl made a change at half-time with defender Yannick Vestergaard introduced for Jan Bednarek and at the other end of the pitch, Southampton tested Guaita for the first time 60 seconds into the second period.

Neat passes between Ings and Adams saw Nathan Redmond presented with a chance, but he could only fire straight at Palace’s goalkeeper from inside the area.

The pitchside monitor was needed not long after when Walker-Peters caught Palace left-back Tyrick Mitchell with a high challenge in the 49th minute.

Referee Moss originally showed a red card for the Saints full-back before he had a second look and downgraded the decision to a yellow card.

Southampton were denied an equaliser with 53 minutes on the clock when Guaita produced a superb point-blank save to deny Adams from close-range.

Palace, with midfielder Cheikhou Kouyate at centre-back alongside Dann, were able to regroup though and the next opportunity for the visitors was 20 minutes later but captain James Ward-Prowse curled a free-kick over.

Zaha had the ball in the net again during the final exchanges, but it was ruled out for offside and Eze had entered proceedings to warm applause from those allowed inside the stadium by this point.

Saints thought they had snatched a point in the fifth minute of stoppage time and yet with Ings ready to celebrate his header, Guaita produced a fine diving save.