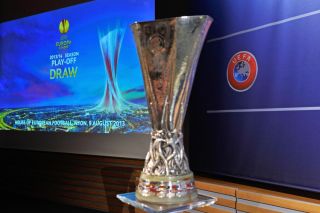 The Europa League group stage begins on October 22, as major clubs from across Europe, including Leicester, Arsenal and Tottenham, once again begin their quest for continental glory.

Today, each team will find out which opponents they will face first in this season's competition when the group stage draw takes place in Nyon, Switzerland.

When will the Europa League group stage draw take place?

Leicester, Arsenal and Tottenham are the representatives from the Premier League, with Celtic and Rangers from the Scottish Premiership, and Dundalk from the League of Ireland Premier Division.

ALSO READ New Champions League ball: What Europe's elite will be playing with in the group stage

How can I watch the Europa League group stage draw?

The draw will be shown live on UEFA.com, with British viewers also able to watch on BT Sport 1, where every Europa League game this season will be shown.

If you don't have a BT Sport subscription, you can get an online monthly pass for £25 here.

How many teams are in the Europa League group stage and who is in each pot?

As always, 48 teams feature in the Europa League, split into four pots, which the teams will be drawn from. Each of the 12 groups will feature one team from each pot, and teams from the same country cannot be drawn in the same group.