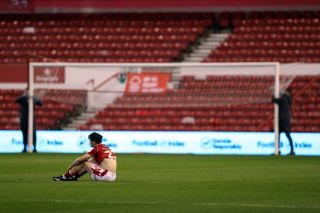 The Reds, in the top six for much of the season, capitulated against Stoke at the City Ground, conceding three goals in 20 minutes as their promotion hopes vanished.

Lamouchi’s team went into the final round of fixtures firmly in the driving seat as his side, Cardiff and Swansea all tried to cement a top-six finish.

Forest could even afford to lose as long as there was not a dramatic swing in goal difference with Swansea. However, that is exactly what happened.

Results rocky for a while

Forest have not looked the same since the restart, winning just two of their nine matches and finishing the season on a six-game winless run.

However, even before football was curtailed due to the coronavirus pandemic, results were on the slide. Lamouchi’s team won just two of their eight Championship fixtures in February and March. One of those victories was against champions Leeds, which just highlights Forest’s inconsistency.

Since the resumption Forest have had a bad, and extremely costly, habit of conceding late goals. Five times in June and July the Reds have conceded in the 90th minute or later.

Those against Sheffield Wednesday, Derby and last weekend at Barnsley were particularly expensive, costing Lamouchi’s side five points. Avoiding just one of those instances would have seen Forest clinch a play-off spot.

Needing just a point against struggling Barnsley to secure a play-off place, Lamouchi raised eyebrows by changing the team’s formation at Oakwell and it did not work.

A five-man back line of Carl Jenkinson, Tobias Figueiredo, Michael Dawson, Joe Worrall and Yuri Ribeiro did not look comfortable and had to survive several scares. Samba Sow, Ben Watson and Tiago Silva lacked creativity in midfield, meaning that Nuno Da Costa and Lewis Grabban had to drop deep to try to get involved. Afterwards, the Frenchman questioned his players’ desire to make it work.

Did Forest get it right in the transfer market?

Lamouchi’s first-choice team is up there among the best in the Championship and capable of beating anyone in the division on its day, but the reliance on those players might have caught up with them. Forest looked dead on their feet against Stoke on Wednesday night. The Reds’ squad depth is not as strong as some of their rivals and it begs the question did they do enough during the transfer windows?

The signings of Gaetan Bong and Adama Diakhaby have hardly been a success while Tyler Walker has not seen much game time and Da Costa, while improving, still looks short of being able to provide suitable back-up for Grabban. Forest have the basis of a very good squad but they need to add to it this summer if they are to challenge for promotion again next season.