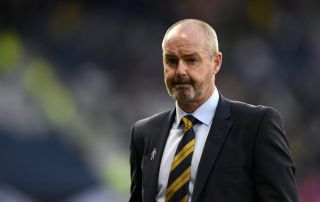 Scotland manager Steve Clarke names his third squad on Tuesday and has a major task to find a goal threat for upcoming Euro 2020 qualifiers against Russia and San Marino.

With Naismith out with a hamstring injury, Clarke has at least one space to fill but injury could deprive him of possible replacements Leigh Griffiths and Marc McNulty after they missed recent games for their clubs.

Here, the PA news agency looks at his options.

The experienced striker has been in fine form for Sheffield Wednesday so far this season, scoring five goals in nine Sky Bet Championship appearances. He has not played for Scotland since last November’s Nations League wins over Albania and Israel and his international future is unclear after he asked to be left out of the squad for the games against Kazakhstan and San Marino to manage his fitness.

The Dundee United man may be a Ladbrokes Championship player but his goals record in recent seasons speaks for itself. After scoring 34 times in all competitions for Ayr last season, Shankland has hit the ground running at Tannadice and already has 15 goals in 12 games this campaign.

Stewart scored eight goals in 16 games for Clarke in a loan spell at Kilmarnock last season and netted on an impressive first league start for Rangers on Saturday in a 5-0 win over Aberdeen.

The Kilmarnock striker was handed his Scotland debut in former boss Clarke’s first game in charge against Cyprus in June. He scored in Killie’s Europa League qualifier against Connah’s Quay Nomads and opened his league account in the recent 3-1 defeat to Celtic but missed his side’s goalless draw against Ross County at the weekend.

Burke was Scotland’s hero against Cyprus as he came off the bench to score a late winner. He then started in Belgium three days later but was left out of the most recent squad. The 22-year-old is on loan at Alaves from West Brom and has made three LaLiga appearances.

Paterson picked up an ankle injury against San Marino in March which ended his season after being handed the striker’s role in Alex McLeish’s final game in charge. He was left out of the last squad, though, and is not deployed as a striker for his club side Cardiff.