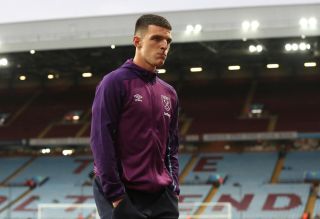 Declan Rice insists West Ham boss Manuel Pellegrini will be just as demanding for Wednesday’s Carabao Cup tie at Oxford as he was ahead of the victory over Manchester United.

The Hammers ran out comfortable 2-0 winners at home to Ole Gunnar Solskjaer’s side on Sunday to continue a fine start to their Premier League campaign.

Just one defeat from their opening six games has left West Ham fifth in the table as they prepare for a third-round clash at the Kassam Stadium.

Despite the game not holding as much appeal as a visit from United, Rice knows the West Ham players will still be challenged to perform at their best.

Asked if it was important not to let the levels drop, Rice told the club’s official website: “One hundred per cent. The manager will be on top of us.

“We trained on Sunday and we’ll have no days off. We’ll be working hard and hopefully we can beat Oxford in the cup and progress.”

.@JackWilshere scored his first goal in the League Cup since his first appearance in the competition over ten years ago, as @WestHam advanced to Round Three.— Carabao Cup (@Carabao_Cup) August 28, 2019

Sunday’s game was West Ham’s third league clean sheet in a row, something they have not achieved since December 2017.

England international Rice believes keeping things tight at the back is playing a huge part in their upturn in form as Pellegrini instils a winning ethos into the squad.

“That mentality not to concede is there,” he added.

Rock solid at the back once again on Sunday 👊 pic.twitter.com/pIpai1asLq— West Ham United (@WestHam) September 24, 2019

“When was the last time we kept three clean sheets in a row? As a West Ham player, I know that never really happens, so that’s a massive bonus.

“We’re working so, so hard from back to front and every time we step out on that pitch the manager is giving us the belief we can win.”

Rice is unlikely to feature at Oxford as Pellegrini shuffles his pack with the likes of Roberto, Fabian Balbuena, Carlos Sanchez and Albian Ajeti all pushing for rare starts.