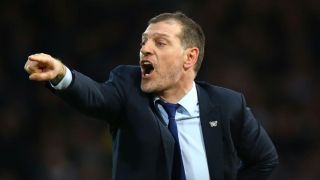 Fresh from a 4-0 thrashing of Southend on their Football League debut, Harrogate Town will be looking to spring a surprise against West Brom in their first ever League Cup outing.

The Baggies were beaten 3-0 by Leicester at the weekend, marking their return to the Premier League in inauspicious fashion. Slaven Bilic will shuffle his pack for the visit of Harrogate, with many of his regular starters likely to be preserved for Saturday’s trip to Everton.

Sunday’s defeat by Leicester served as a reminder of how difficult this season will be for West Brom. A poor end to last term and a relatively quiet summer saw Foxes fans enter the campaign with more pessimism than optimism, while West Brom were hoping to carry over last season’s momentum and winning habit into this.

Instead, the Baggies were comfortably overcome by Brendan Rodgers’ side, leaving Bilic with plenty to think about as he attempts to plot a path to survival.

For now, the focus is on this League Cup second-round tie. West Brom could revert to a four-man defence after using three at the back against Leicester, with the likes of Ahmed Hegazi, Cedric Kipre, Kamil Grosicki, Kyle Edwards, Hal Robson-Kanu and Charlie Austin expecting some game time.

Harrogate manager Simon Weaver will need to select his side carefully: after Wednesday’s trip to The Hawthorns, Town have three games in the next 10 days.

Even if Bilic opts for his second string, West Brom should prove too strong for the visitors. Harrogate will be full of confidence, though, so an upset is not beyond the realms of possibility.

The winner of this game will face either Southampton or Brentford at home in the third round.

Kick-off is at 6pm BST and the game is being shown on Sky Sports Football in the UK. See below for watching details where you are.

SEE THE FULL SCHEDULE Premier League live streams: How to watch every game