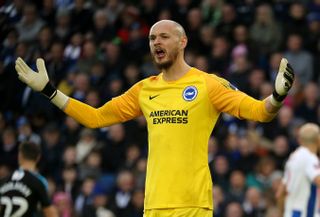 The 31-year-old has joined the Baggies on a two-year deal and will fight for the number-one spot at the Hawthorns with Sam Johnstone and Jonathan Bond, who has also signed a new one-year contract.

Button, who has also had spells at Tottenham, Charlton, Brentford and Fulham, made 11 appearances during a two-year stay at Brighton.

He told West Brom’s official website: “I have ambitions of playing and helping the team as much as possible but I obviously understand that Sam has got them promoted last season so he will start the season.

“It’s up to me to push him and show the manager what I can do and take my chances when I get them.

“Hopefully there’ll be things I can bring to the squad certainly. I’m quite calm and comfortable with my feet too and commanding in my box so I’d say they’re my main strengths.

“The goal this season is to be successful and from a personal point of view I’m ambitious and want to play as much as I can so I’ll be pushing Sam and making sure if I’m not playing then he’s playing well so that can only benefit everybody.

“We’ll all be pushing to bring the best out of each other.

“As soon as I heard they were in for me I was delighted and now it’s over the line and signed I can’t wait to get going.”