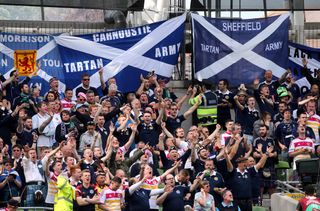 Steve Clarke admits the Tartan Army will be missed in Scotland’s Nations League opener against Israel at Hampden Park on Friday night.

Ongoing coronavirus restrictions means the match will be played behind closed doors on the south side of Glasgow.

The Scotland boss bemoaned the lack of support from the stands, although he is happy that his players have experience of playing in front of no supporters as they look to get off to a positive start to their campaign.

“I don’t know what to expect, is the truthful answer,” said Clarke.

“The good thing for me is that all the players have already experienced the situation. It is only myself and the coaching staff that it will be a little bit different for.

“We might be able to get more information on top of the pitch but it is certainly going to be different.

“Football without a crowd is not really the spectacle that we want it to be and the quicker the crowds are in the better, but obviously it has to be safe for that to happen.

“The players will be motivated to play for their country. If you watch the high-level players play in the Europa League and Champions League in the knockout system, those top players, even without a crowd, will produce high quality.”

Players and management from both sides will take a knee in support of Black Lives Matter.

Clarke said: “The players think it is very important. It is the first time as a country that we have a chance to do that.

“We support equality and everything that goes with that message.

“It is very important and I know Israel are going to do that as well. It is important that everyone shows that we are right behind Black Lives Matter.”