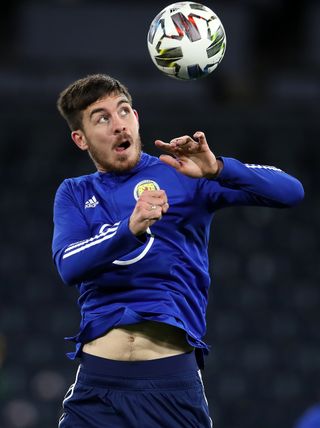 Scotland defender Declan Gallagher is confident they can beat Serbia and clinch their Euro 2020 dream – and he has urged the nation to share his positivity.

The Motherwell player was an impressive presence at the heart of Scotland’s defence as they stretched an unbeaten run to eight games with the help of three consecutive clean sheets in six days.

Gallagher recently called on Scottish fans to be more positive ahead of Europa League fixtures and he feels his point was vindicated by the amount of Scottish Premiership players involved in the wins over Israel, Slovakia and Czech Republic.

“I have said this before, the Scottish fans are quick to put Scotland down,” the former Livingston player said.

“Even the other night there I still saw people being so negative: ‘Aye, but we played against Czech Republic’s D team and only beat then 2-1’. ‘They (Slovakia) made nine changes’.

“We made four changes against Slovakia and we had three out with Covid issues, so it shows we can change the squad as well.

“With the likes of myself, Andy Considine, Stephen O’Donnell, it just shows the Scottish league isn’t far away from the English league at all.

“I think the Scottish fans need to start backing our league a bit more because we showed the other night, we played against Czech Republic’s main team and beat them 1-0, regardless of how the performance was.

“We have gone eight games unbeaten so we have to take a lot of pride from that.”

When asked if he was confident Scotland could continue their run in their play-off final in Serbia on November 12, Gallagher said: “Definitely. Over the last two camps we have had that confidence. It’s eight games unbeaten so we have to start taking more confidence in ourselves and our performances.

“We have to go into the Serbia game believing we can win it or there is no point turning up.”

Gallagher was playing in Scottish League One four years ago but has quickly taken to international football over the past 12 months with five wins from five caps.

“You go into a changing room full of boys and have the banter, it’s the same banter as there is back here. Nothing changes just because of the money they make or the clubs that they play for.

“The boys are all down to earth and great guys so it’s easy to adapt.”

Gallagher is now looking to maintain his positive mind-set as Motherwell take on St Mirren on Saturday.

“The reason I got my call-up was because I was playing well for my club and I have to continue that,” he said.

“I spoke to Stephen Craigan the other day and he said one of the biggest things mentality-wise was trying to go from the high you got at international football and take it back to club football.

“I have to work at keeping that high, keeping it positive, and take it into my club football.”