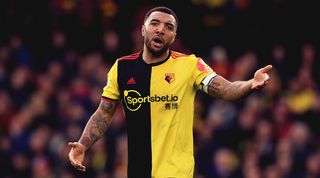 Watford are back in the Championship. There is plenty of change down at Vicarage Road with a new manager and a new target for a club who had become a Premier League mainstay - the Hornets will be aiming for immediate promotion back up to the big time.

It won't be easy tonight, however. Middlesbrough's late form towards the end of last season was good under new manager Neil Warnock. The veteran will be hoping to get another club promoted and repeat the heroics he's worked at other second-tier sides.

Kick-off is at 7.45pm BST and the game is being shown on Sky Sports Football, Sky Sports Main Event and Sky Sports Ultra HD in the UK. See below for watching details where you are.

GUIDE Watch the Premier League, Championship and much, much more - how to watch BT Sport, Sky Sports and BBC games on a Now TV Stick

It costs a tenner to see your team, but it only costs £6 if you are watching from overseas. So a smart tip is to get yourself a handy VPN, and set your location to overseas and pay less. We recommend ExpressVPN (more on which below).

Sky Sports is the two main players once again, but iFollow is your best bet if these two aren't showing them.