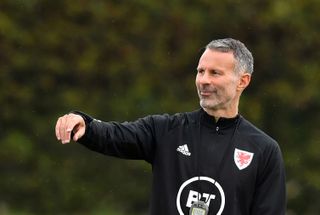 Ryan Giggs has warned England to expect an improved Wales at Wembley next month.

But manager Giggs says Wales will be sharper against neighbours England in their October 8 friendly following back-to-back Nations League wins over Finland and Bulgaria.

Wales have lost their last five games against England, most recently at Euro 2016, with their most recent win coming in the final British Home Championship clash between the two nations at Wrexham in 1984.

“We were a little behind physically against Finland and Bulgaria,” said Giggs, whose side have not lost since June 2019 and are now eight games unbeaten.

“They are further ahead in their seasons but when we’re better physically I think you’ll see an improvement in the sharpness and tempo of the passing, the movement.

“We will be better in October and we go into every game thinking we’ve got a chance.”

Giggs has handed debuts to 18 players since being appointed Wales boss in January 2018 and is delighted with the developing squad depth ahead of next summer’s delayed European Championships.

“The strength in depth is getting there,” he said. “When you think of the players that are missing, also the players who are coming in.

“The likes of Dylan making his debut, Ben only had a couple of minutes (in Finland), but it will help them going into the future, and that’s what we want.

WHAT A FEELING!!! Buzzing to have scored the winner on my home debut for my country 🏴󠁧󠁢󠁷󠁬󠁳󠁿🤩 doing my family proud. Gutted the fans weren’t there to be in the moment. @FAWales#getinnecopic.twitter.com/lwDZonXdR4— Neco Williams (@necowilliams01) September 6, 2020

“We want the fact that when we are missing four or five players we’re not weakened, that there’s players that can come in and do a job.”

“All the subs were involved in the goal (against Bulgaria) and scoring late has an effect on the opposition.

“If you keep scoring late goals, it gives you belief to keep going until the end and that’s what we did.

“You need that desire and quality and fitness. I was really proud of how the players kept going because not many have played minutes and the Finns and Bulgarians had played.”

Wales had David Brooks available for the first time since June 2019 against Bulgaria after the Bournemouth forward missed most of last season following ankle surgery.

Brooks, who has been linked with Manchester United since the Cherries’ relegation from the Premier League, improved as the game unfolded and struck the woodwork in the second half.

“It’s been over a year so it’s a really good feeling to be back out there. Hopefully with more games I’ll get a bit sharper.”