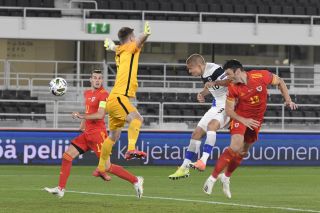 Wales hero Kieffer Moore says Ryan Giggs’ side have a winning mentality that will not be broken.

Moore’s late close-range finish gave Wales a 1-0 victory against Finland as their Nations League campaign got off to a perfect start in Helsinki on Thursday night.

It was Wales’ third successive win in an unbeaten run of seven matches and a further boost of confidence for the Euro 2020-bound Dragons ahead of Bulgaria’s visit to Cardiff on Sunday.

“Winning is a mindset and I don’t think we’re ever going to stray from that,” Cardiff striker Moore said after his third goal in six Wales appearances.

“We will do everything as a team we can to keep winning.

“It’s a massive result. We are all at different stages of fitness and to get that win under our belt to go again on Sunday is massive for us and it’s only going to help us going forward.

“Those three points are going to be vital for us.”

Moore’s Helsinki winner saw him become the first Wales player to score in three consecutive away games since Aaron Ramsey in 2013.

The 28-year-old Torquay-born striker scored vital goals in Euro 2020 qualifying in Slovakia and Azerbaijan last autumn and his ability to hold up play and bring others into the game has played a huge role in turning around Wales’ fortunes.

And Moore’s former Barnsley team-mate Adam Davies, the Wales back-up goalkeeper, has explained his role in helping the 6ft 5ins targetman choosing to play for the Dragons through his grandparental qualification.

“When it came along he talked to me and I explained what a tight camp the lads are and what the staff are like,” Davies said.

“He made his mind up and I’m not surprised by what he’s done.

“He’s such a big lad, such a strong lad, and he’s got so much ability.

“When defenders come up against him it’s a long old game for them. I used to love playing with him at Barnsley.

“He’s done fantastic, works hard on and off the pitch and deserves everything he gets.”

Wales manager Giggs sent out a youthful side in Helsinki with injuries to senior players Joe Allen and Ramsey, while central defenders Chris Mepham and Joe Rodon were also missing.

Wales’ injury problems have slightly eased with Bournemouth forward David Brooks joining up with the squad in Cardiff ahead of the Bulgaria game.

Brooks missed most of last season as Bournemouth were relegated from the Premier League after undergoing ankle surgery. He has not played for Wales since June 2019.