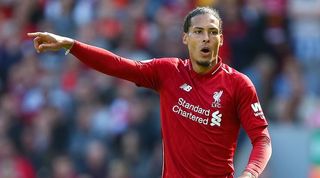 The Dutchman was the subject of speculation that a fresh six-year deal would imminently be confirmed.

However, he has since revealed that there has been no movement to extend his Liverpool deal beyond the current terms running to 2023.

"There is nothing going on, so that's it," he told Sky Sports News.

When asked if he would like to open talks, he responded: "That's not on me. I saw some reports in the media that I was agreeing a new deal and stuff.

"But I'm not even discussing anything at the moment. The only thing I want to do right now is focus on the games and we'll see in the future what may happen."

Liverpool opened their Champions League defence with a 2-0 defeat away to Napoli on Tuesday but have already opened up a five-point lead at the summit of the Premier League table after five games.

RANKED! The 101 best players in the Premier League right now

QUIZ! Can you name the last 20 Champions League or European Cup-winning managers?