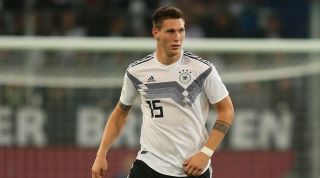 Virgil van Dijk has praised Bayern Munich centre-back Niklas Sule, claiming that the 24-year-old is among his favourite centre-backs.

The two defenders came face-to-face when the Netherlands beat Germany 4-2 in a Euro 2020 qualifier on Friday.

Sule has become Bayern's leading centre-half this season after Mats Hummels returned to Borussia Dortmund in the summer.

And Van Dijk, who recently beat Lionel Messi and Cristiano Ronaldo to the UEFA Men's Player of the Year award for 2018/19, believes Sule is a highly gifted player.

“I’ve been watching Sule’s development for a long time,” the Liverpool man said. "I’ve played against him often, he is a very talented defender. Süle has a great future ahead of him. He plays for a big club and is already a cornerstone there.”

After a 4-0 thrashing of Estonia on Monday, the Netherlands sit third in Group C - although they have played one fewer game than Germany and Northern Ireland.

What’s Lionel Messi like in real life? From mumbling diamond to mercurial genius – but still a man of few words

Ranked! EVERY England manager from worst to best