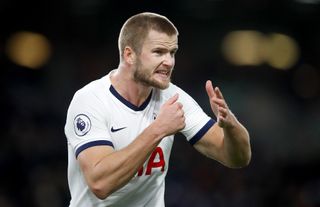 Spurs are embarking on a possible run of nine games in 22 days as they pay the price of having to enter Europa League qualification.

The quickfire rounds of the Carabao Cup also hurt them as they will have two weeks where they have to play Tuesday, Thursday, Tuesday if they progress in all competitions.

"If you want to be competitive, it's all about the way you react after poor performances and results."— Tottenham Hotspur (@SpursOfficial) September 16, 2020

They head to Bulgaria on Thursday to take on Lokomotiv Plovdiv before matches with Southampton on Sunday, Leyton Orient on Tuesday and then a likely trip to either Macedonia or Romania next week.

Dier believes Spurs have the squad to cope with it, but says there is a welfare issue.

Tottenham look set to add even more depth to their squad with the proposed signings of Gareth Bale and Sergio Reguilon, who is set for a medical on Thursday.

Bale’s return to Spurs seven years after his departure for Real Madrid is dominating the headlines, but Dier is not getting caught up in the media frenzy.

“No, nothing in the WhatsApp group,” he said when asked if his team-mates had been discussing it. “There is a lot of speculation and nowadays it is impossible not to see it but it is not really for me to speculate on.

“He is still in the Real Madrid dressing room. I really can’t talk about a player from another team. It has got nothing to do with me.

“I am sure from the fans’ point of view, when you are linked to a player of that level it is exciting for any club.

“For me personally it doesn’t really affect me in any way. It is not the first time and it won’t be the last time, there is constantly speculation about different people going different places.

“Every day people are trying to fill the newspapers and websites. It doesn’t really affect me in any way, I am used to it.”