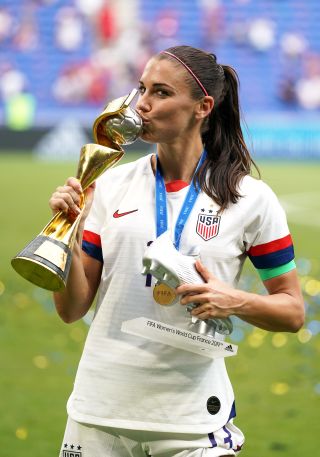 Tottenham have reached an agreement to sign World Cup winner Alex Morgan on a one-year deal.

The London club have announced the United States international will join them for the 2020-21 Women’s Super League campaign, subject to obtaining a visa.

We are delighted to announce that we have reached agreement for the signing of two-time @FIFAWWC winner Alex Morgan! 🤩🙌— Tottenham Hotspur Women (@SpursWomen) September 12, 2020

Her arrival is another coup for the English game after a recent influx of talent into WSL.

She is the fifth member of last year’s World Cup-winning side to move to the competition after Sam Mewis and Rose Lavelle (Manchester City), and Tobin Heath and Christen Press (Manchester United).

She made headlines after last year’s semi-final victory over England when she celebrated a goal by pretending to drink a cup of tea.

The move sees Morgan step up her return to action after giving birth to a daughter in May.

Morgan had a previous spell in Europe with Lyon in 2019, helping the French club win the Champions League.

A statement on the Spurs website read: “We are delighted to announce that we have reached agreement for the signing of two-time FIFA Women’s World Cup winner Alex Morgan, subject to obtaining a visa.

“The USA international striker joins us for the 2020-21 season and will wear the number 13 shirt.”