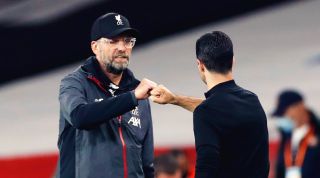 LATEST ODDS ON LIVERPOOL VS ARSENAL

Liverpool may only have just hosted Arsenal in the Premier League on Monday but here are again at Anfield for another clash of two teams who usually seem to deliver goals and excitement in abundance.

The last three meetings between this pair generated a three goals, two goals and four respectively but around this time last year, Liverpool knocked out Unai Emery's Arsenal on penalties after a 5-5 thriller. Could we see more of the same tonight?

Naturally, there will be a lot of rotation on both sides. Both clubs have a lot of depth and youngsters hoping to prove themselves to their managers, so we could see two completely different sides from Monday night's game. Diogo Jota - who got the clincher for the Reds - may well start from the outset as Jurgen Klopp looks to shuffle his pack.

Arsenal may well hand new goalkeeper Alex Runarsson a debut while there could be well be chances for the likes of Reiss Nelson, Bukayo Saka and Nicolas Pepe to stake a claim for first-team spots.

Kick-off is at 7.45pm BST and the game is being shown on Sky Sports Premier League, Sky Sports Main Event and Sky Sports Ultra HD in the UK. See below for watching details where you are.

GUIDE 88 Premier League games in one place! How to watch BT Sport, Sky Sports and BBC games on a Now TV Stick

If you’re on holiday or just simply out of the country, your domestic on-demand services won’t work – the broadcaster knows exactly where you are from your IP address. Your access to the game will be automatically blocked, which is annoying if you’ve paid a subscription fee and don't want to use an illegal, buffering stream that makes you miss another Jose Mourinho tantrum. And that's where we recommend ExpressVPN (more on which below).