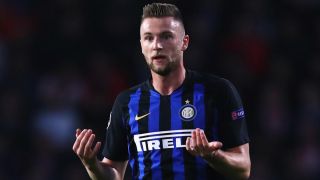 Tottenham will step up their efforts to land Inter Milan centre-back Milan Skriniar this week, as Jose Mourinho looks to add quality to his back line, according to the Guardian.

Inter insist they will not accept anything less than the Slovakian's £50m asking price - a fee Tottenham have made it clear they are unwilling to pay so far - meaning a deal is far from close. However, with Spurs lacking depth in that area, the club may need to compromise, not least to appease the manager.

Jose Mourinho has identified Skriniar as his number one defensive target as the transfer window enters its final week. The 25-year old has been sensational in Italy since joining Sampdoria from MSK Zilina in 2016. He moved to Inter a year later and has been an ever present in the side since.

Spurs have already brought in Matt Doherty, Pierre-Emile Højbjerg and Sergio Reguilin on permanent deals this summer for a combined £55m, as well as the expensive loan signing of Gareth Bale from Real Madrid.

The effects of the coronavirus, as well as the teams failure to qualify for the Champions League last season, have reportedly cost Spurs more than £200m this year, meaning funds may be difficult to raise. Mourinho will nevertheless tell club chiefs they have no choice but to sign a player he feels can help them secure a top four finish this campaign.

Skriniar is a tall, strong, quick and intelligent defender. His leadership qualities are also seen as an ideal replacement for Jan Vertonghen, the former Spurs defender who left to join Benfica this summer.

Mourinho has so far appeared unsure about his preferred backline, with established central defenders Davinson Sanchez and Toby Alderweireld competing with Eric Dier, a midfielder by trade, for a starting berth in Tottenham's three league outings so far.

Results have been a mixed bag, with one win, one draw and one loss. Hardly Champions League qualification form, as the club's Portages manager will stress this week.