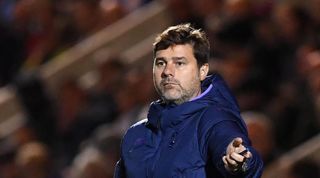 Tottenham manager Mauricio Pochettino says the January transfer window will be an opportunity for the club to “fix this situation”.

Spurs’ difficult start to the season continued when they were knocked out of the EFL Cup by Colchester on Tuesday.

The League Two outfit triumphed on penalties after a goalless draw at the JobServe Community Stadium, with Lucas Moura and Christian Eriksen failing to convert from 12 yards.

Tottenham have now won only one of their last seven matches in all competitions, and are already 10 points adrift of Premier League leaders Liverpool after just six games of 2019/20.

Saturday’s 2-1 loss to Leicester means they are without an away win in the top flight since January 20, when they edged out Fulham at Craven Cottage.

And Pochettino says he and his staff will look to do “something different” in a bid to rectify the team’s recent woes.

“We are working so hard to put everyone on the same page,” he said. “Only we need time.

“January is going to be a good opportunity too to fix this situation and the next one [transfer window]. That is the problem when something happens that you cannot control.

“It means we are human and in football to keep the successful period in football you need to be different every season and find different solutions. We need to do something different and we will do that.

“It's because we have the experience in football and the feelings in pre-season I told you. Now it’s about arriving in a difficult situation and we need to recover the time we lost in pre-season.

“Maybe our performances are good, but it’s about having a different agenda and we need to build that togetherness.”

Spurs return to Premier League action with a home game against Southampton on Saturday.

Andy Mitten column: How Manchester United hit upon their new safe standing plans – and showed that fans are being listened to