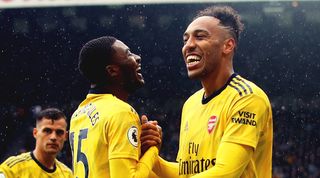 Maitland-Niles - known affectionately by Arsenal fans as 'The Bird Catcher' - has been rumoured to be unsettled at Arsenal for a while, now. After starting as a right-back early in Mikel Arteta's tenure, the Hale End graduate has only featured for the Gunners sporadically since, with questions raised about his work ethic.

Having just won the FA Cup playing as a left-back at the club he grew up with, Maitland-Niles is a target for Spurs.

REVEALED! Which teams have the easiest – and hardest – starts to the 2020/21 Premier League season?

Jose Mourinho has identified the 22-year-old as a standout option to replace the erratic Serge Aurier, while also offering cover at left-back for Ben Davies. Maitland-Niles is also capable of performing in midfield, or as a right-winger, and was a member of the U20 World Cup-winning England side of 2017.

Wolverhampton Wanderers and Brighton & Hove Albion are both said to be interested in his services, with several Bundesliga clubs also considering bids.

Jose Mourinho has already spent extensively during his short time as the Tottenham manager but still plans to add to his squad before the transfer window slams shut.

Paulo Dybala remains a target for Spurs, who were rumoured to be in for the Argentinian last summer before he opted to stay at Juventus. New Juve boss Andrea Pirlo is still laying out plans for the side he inherited from Maurizio Sarri, with Tottenham also said to be interested in taking another former Gunner, Aaron Ramsey.

On top of this, Tottenham would also like another centre-back and potentially another attacker.

SPURS NEWS Tom Hardy announced as series narrator for All Or Nothing: Tottenham Hotspur

With Jan Vertonghen leaving on a free transfer to Benfica recently, Spurs are said to be looking at Ben White from Brighton, after his impressive loan spell with Leeds United last season. John Stones from Manchester City is also an option for Mourinho's side, as Pep Guardiola looks to revamp his team after an embarrassing Champions League exit to Lyon.

Leon Bailey of Bayer Leverkusen is also on Mourinho's radar. Rumours in recent weeks have grown louder linking the Jamaican to the club, though his arrival would probably force one of the established forwards out of the club - most likely Lucas Moura.