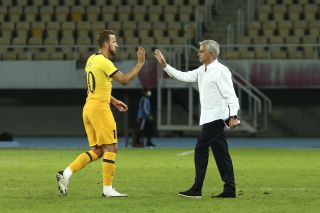 Jose Mourinho revealed how Tottenham were forced to move the goalposts ahead of their Europa League qualifying win over Shkendija.

Spurs needed goals from Son Heung-min and Harry Kane in the final 20 minutes to beat their North Macedonian hosts 3-1 and go through to next week’s play-off against Maccabi Haifa.

But Mourinho says his goalkeepers noticed the framework at the Tose Proeski Arena in Skopje were too small in height before the match and demanded they were changed.

Mourinho later posted pictures on Instagram of himself almost touching the crossbar while Tottenham goalkeeper Hugo Lloris was easily grabbing the woodwork.

There are no suggestions of foul play from Shkendija as the stadium in the North Macedonian capital is not their home ground.

“Before the game was a funny situation because my goalkeepers told me that the goal was small,” Mourinho said.

“I am not a goalkeeper but I know football since I was a kid and I know when I stand there and I spread my arms and I know the distance, so I felt immediately that something was going wrong.

“We got the UEFA delegate to confirm and yes it was 5cm smaller, which of course we demanded for the goals to be replaced for goals of the right dimension.”

Spurs could have done with even bigger goals in the first half as they struggled to put the minnows to bed after taking an early lead through Erik Lamela.

And they paid the price early in the second half as Valmir Nafiu’s thunderbolt threatened to turn Spurs’ evening sour.

But trusted duo Son and Kane, who was brought off the bench, came to the rescue with goals in the final 20 minutes to get the job done.

“We just did our job. We did not play magnificent. We did our job in the end which is to qualify for the next round.

“When Harry came to the game and Sonny started coming from the left it’s more his natural habitat and he had his chance and he scored a goal which was very important for us.

“We were going into a direction of big risk when you have 1-1 in the result. If you let the game go you are in a big risk, so the second goal was important.

“When Harry scored it killed the game which probably we should have done in the first half. In the first half we were 41 minutes without scoring and then we gave them space to play.

“In the second half the game became more difficult for us after our changes and something that pleases me a lot, because I like to feel the players on the bench committed to the team and ready to make an impact. The people who came from the bench made a difference.”