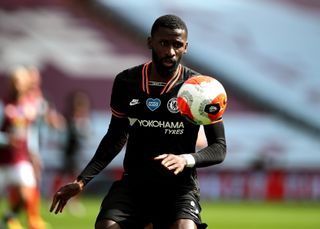 Toni Rudiger could seek a move away from Chelsea after being omitted from the Blues’ matchday squad for a second successive game.

The Germany defender was not on the bench for Sunday’s 2-0 Premier League home loss to Liverpool, and also missed Wednesday’s Carabao Cup clash with Barnsley.

And the PA news agency understands the 27-year-old could now look for a Stamford Bridge exit, with the likes of Paris St Germain interested.

Fellow defender Fikayo Tomori made his first appearance since February against Liverpool, and retained his place for the League Cup clash with Barnsley.

Rudiger could now complete a loan move ahead of the October 5 transfer deadline, especially in light of boss Frank Lampard refusing to guarantee the German’s west London future.

When asked if Rudiger could leave, even on loan, in this transfer window, Lampard said: “I’m going to skirt around that question. It remains to be seen.

“We’re not in a period where the transfer window or market is acting like it has done in recent years in terms of how players move or what level they move at.

“Again the competitive games have just started. I’m very open to those conversations with the players as the next couple of weeks go on.

“My priority will always be making sure I maintain and keep the strongest squad I can for this club but after that of course the individual conversations will happen within that.

“I will try and make sure I go into the season once the window shuts with the squad that I feel is healthy and competitive in a healthy way.”

Former PSG defender Silva made his Chelsea debut in Wednesday night’s League Cup clash with Barnsley, while Leicester recruit Ben Chilwell was on the bench and primed for his own Blues bow.