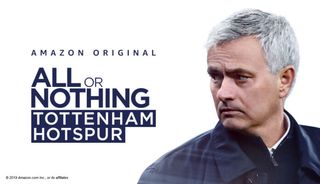 Get ready for the first football documentary you’ll grow increasingly uncomfortable watching with your mum. All Or Nothing: Tottenham Hotspur promises to be the gruffest, hunkiest football series yet, with the announcement of actor Tom Hardy as its narrator.

The London-born Hollywood star was revealed via a short teaser on the Amazon Prime Instagram and Twitter accounts on Thursday evening, sending social media into meltdown. Hardy’s cockney tones will guide viewers through the series, which takes fans behind the scenes during Tottenham’s eventful 2019/20 campaign.

Sign up for a free Amazon Prime trial now, and you'll be able to watch the series when it airs on August 31

🔊 Sound on🎙 Can you guess the Hollywood star who will be voicing All or Nothing: Tottenham Hotspur?Reply below! pic.twitter.com/JJinVcoRVSAugust 20, 2020

Key events include the move into the club’s new 62,000 seater stadium, the sacking of manager Mauricio Pochettino, the arrival of his replacement Jose Mourinho, and the interruption to the Premier League season as a result of the pandemic.

Hardy’s experience playing super villain Bane in the The Dark Knight franchise should prove invaluable during scenes featuring Mourinho, a man who didn’t merely adopt the darkness but was raised and, indeed, moulded by it.

“You’re a team of good guys. But good guys never win.” Here’s the brand new trailer for @primevideosport’s ALL OR NOTHING: @SpursOfficial placing Jose Mourinho’s arrival more at the center. First three eps out on 8/31 (via @primevideosport) pic.twitter.com/9PMGOcuZOZAugust 14, 2020

Tottenham’s lack of penalty defeats last season will, however, deny Hardy the chance of demanding “A PROPER SHOOTOUT!” a la Reggie Kray in the hit film Legend. Rumours we’ve just made up do suggest Harry Kane gets called a “slag” and Harry Winks a “muppet” at various stages, though. You won’t want to miss it.

All or Nothing: Tottenham Hotspur launches exclusively on Amazon Prime Video on August 31, with three new episodes every Monday until 14th September.