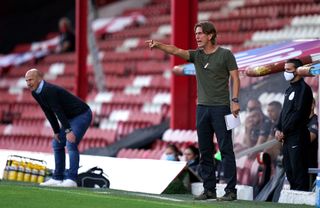 Brentford boss Thomas Frank vowed to keep fighting for a place in the Premier League after they fell agonisingly short of automatic promotion.

The Bees were chasing a goal to beat relegation-threatened Barnsley and leapfrog West Brom, who were held 2-2 by QPR, into second place.

But they were caught on the break and substitute Clarke Oduor swept the ball home to seal a 2-1 victory which kept Barnsley up – for now at least – and sparked jubilant scenes on the visiting bench.

Frank said: “Football is 80 per cent suffering and 10 per cent joy. When you have that opportunity to go direct to the Premier League, that is the emotional part of it – but Barnsley did a good job.

“Right now everything is tough but this is football and this is life. This was not straightforward.

“We can’t sit down and cry too long because that will never help anything.

“We need to go again and pick ourselves up. We will have a sleep and then be ready to fight again.”

The Tykes had led through Callum Styles’ strike shortly before the interval, before Brentford equalised through Josh Dasilva, and top scorer Ollie Watkins will not look back fondly on the late chance he squandered.

The Bees had won seven matches after the lockdown to cut the gap to West Brom from 10 points to just one, only to blow their big chance to go second with back-to-back defeats.

Nevertheless the scene was set for a memorable final game in Griffin Park’s 116-year history, not least when news of West Brom’s struggles began filtering through.

However, they could not find the win they needed meaning their charming but tired old ground will host one more match, the second leg of the play-off semi-final against Swansea next week.

Barnsley arrived in west London harbouring only slim hopes of avoiding having to leave the Championship in the opposite direction but victory looks to have kept them up.

It was a remarkable achievement considering they were 10 points from safety after a home loss to Birmingham in February.

Barnsley’s fate could yet be decided by Wigan’s appeal against their 12-point deduction but Tykes boss Gerhard Struber insisted: “We are safe!

“I think eight weeks ago I told my boys we need everyone in the squad and I think today Callum and Clarky scored the most important goals of the season.

“Now we are very happy with a big result, we are staying in the league. Now it’s time to celebrate, have a big party, and not speak about the future. We are in the here and now. It’s party time.”