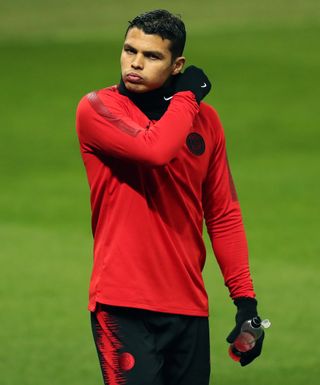 Thiago Silva is dreaming of ending his Paris St Germain career with Champions League glory after the French champions booked their place in the final.

PSG are one win away from becoming European champions for the first time after claiming an emphatic 3-0 win over RB Leipzig in their semi-final in Lisbon, with goals coming from Marquinhos, Angel Di Maria and Juan Bernat.

Silva is set to leave the French club after Sunday’s game against either Bayern Munich or Lyon and wants to go out in style.

“I don’t want to talk about that (his future) because it is not going to help us, but I want us to celebrate all together the last match with a title,” he told radio station RMC.

“I have already said a lot of times before I wanted to, that I want to finish (my career) here in Europe. A decision was taken, now things are calm in my head. It will be in another club, but my heart will stay here.”

It was a comfortable evening for PSG, who finally delivered on the big stage after years of falling short in Europe’s premier club competition.

“There were difficult moments, but today, we deserved to be in the final,” the Brazilian added. “I am very happy with my team and how we behaved today.

“We tried not to concede a goal right until the end, because up top, we know that we are very strong and can always score.”

For Leipzig, it is the end of their impressive Champions League journey which saw them beat Tottenham and Atletico Madrid in the knockout stages, and 33-year-old boss Julian Nagelsmann leaves the tournament with his reputation sky high.

But they exited with a whimper as PSG controlled the entire game.

Nagelsmann was not ready to reflect on their success this season just yet.

“The ticket for the final for PSG was well deserved,” he told BT Sport.

“It was hard to come back into the game and at the end they were the better team today, you have to accept it but it is hard.

“It is not that easy to think about the good season we did in the Champions League, but in a week it will be OK.

“We know the Champions League season was very good with a young team and we will try and do it again next season.

“We have to work for the Bundesliga and the cup and try and do it again next season in the Champions League.”