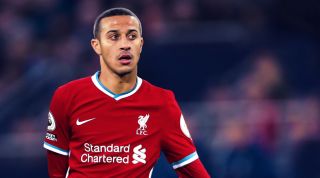 Liverpool look to have ended one of the longest-running transfer sagas of the summer, with the Reds on the verge of signing Thiago Alcantara from Bayern Munich.

The Reds have been linked with the Spaniard all summer long, though weren't expected to complete the deal before Bayern's involvement in the Champions League ended. Now, it looks as if they have their man.

The fee is believed to be around €30m for the 29-year-old, who has one year left on his current deal in Germany. There doesn't seem to have been much competition for Thiago's signature, though rumours linked him to Arsenal and Manchester City at various points during the window.

Best of all for Liverpool fans, however, it appears that this deal is being done without the need to offload a key midfielder.

PREDICTED! FourFourTwo writers pick the players, managers, flops and signings of the season

Gini Wijnaldum has been heavily linked with a move to Barcelona amidst talk over his contract. While that move may still materialise, it was expected that Jurgen Klopp would have to sacrifice the Netherlands international before completing the move for Thiago - which isn't the case anymore.

It's thought that Thiago will be given around £200,000 a week at Liverpool. According to reports of Liverpool's wage structure, this would put him as second only to Mohamed Salah in terms of earners, who earns £20,000 a week more. Sadio Mané and Alisson are apparently on £150,000, while Virgil van Dijk collects £180,000 a week.

QUIZ! Can you name every club Mohamed Salah has scored against for Liverpool?

Thiago is likely to be given the No.6 shirt by the club, too - as previously worn by Dejan Lovren, who left for Zenit Saint Petersburg earlier in the summer.

Liverpool have been particularly cautious in this window, only signing left-back Kostas Tsimikas from Olympiacos so far, after failing to agree a fee with Norwich City for Jamal Lewis. Signing Thiago though is a big statement of intent for the champions and might not be the last deal completed before the October deadline - since the club are also a centre-back short right now.

Lovren's exit left Jurgen Klopp with just three recognised senior centre-backs. Now, forward Rhian Brewster is being linked with a move after from Anfield, with Sheffield United interested in the youngster.

KYLIAN MBAPPÉ PSG star tells the club he will leave at the end of the season, with Liverpool among the Premier League sides on alert

Divock Origi, who scored the winner in the Champions League final last year, is also a name who may leave. Liverpool are apparently open to letting him move elsewhere on loan but would insert an obligation for the loaning club to buy the Belgian.

Klopp looks set to utilise some of the young talent coming through at Anfield this season, incorporating the likes of Curtis Jones, Neco Williams and Harvey Elliott more into his plans.