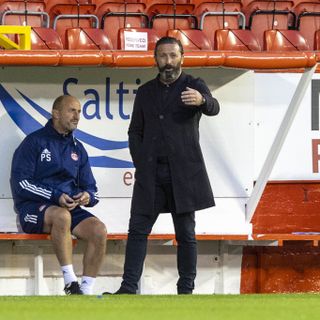 Aberdeen manager Derek McInnes warned his side rack up their fifth straight win in all competitions – and then warned there was still more to come from them.

Since an opening defeat to Rangers, McInnes’ men have won every game they have played this season, keeping four clean sheets in the process, with Ross McCrorie’s first-half finish enough to see off Kilmarnock.

That form has impressed McInnes, who kept faith with the same team which beat Hibernian prior to the international break.

He said: “I’m very pleased. Obviously it keeps the winning run going and I’m pleased with a lot of aspects, particularly the speed in the team.

“The goal was an example of that – we countered from deep and it was a great finish from Ross. It wasn’t an easy chance, but he made it look easier than what it was.

“When you select a team like we have, there’s a trade-off in terms of defending, and I think we gave Kilmarnock too much encouragement at times.

“The exciting part for me is that I know there’s better in us. We work hard to get a better 90-minute performance, but we’ve only conceded two goals in the six games we’ve played.”

Kilmarnock boss Alex Dyer felt his side could have taken something from the game.

He said: “It’s fine margins. The boys worked hard and played well, especially in the second half we were on the front foot.

“We created opportunities but just weren’t clinical enough to get something out the game. We have to dust ourselves down.

“The players are gutted not to get something from the game but they know they played well.”