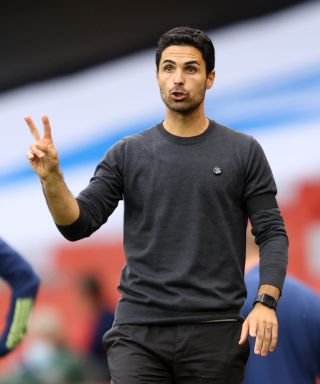 Mikel Arteta insists Arsenal’s transfer business is far from complete as he told fans they can “relax” over the future of captain Pierre-Emerick Aubameyang.

The Gunners have signed playmaker Willian on a free transfer from Chelsea, while also spending a reported £22million initial fee on Lille defender Gabriel Magalhaes.

Despite their known financial struggles, summed up by the fact the club made 55 redundancies last month, Arsenal continue to be linked with moves for the likes of midfielders Daniel Partey and Houssem Aouar.

Arteta, who was promoted from head coach to first-team manager on Thursday, did little to quell speculation about future signings as he confirmed they are hopeful of more arrivals before the window closes on October 5.

“We are still active in the market, we are looking at different options,” he said on the eve of Arsenal’s Premier League opener away to newly-promoted Fulham.

“We are active in the market with players in and out, at the moment the squad balance is not ideal.

“There is still some work to do, but we have to bear in mind the complications of this market.

“The complexity and as well the timing because you can see that clubs are behaving in many different ways and it is a bit uncertain how this is going to evolve in the next few weeks.

“Numbers-wise, some positions are overbooked. Some others, in terms of the specific qualities we need, are still not there.”

Arsenal are still likely to move some players on before the deadline, but Arteta would not be drawn on the future of goalkeeper Emiliano Martinez, who has been heavily linked with Aston Villa despite a fine end to last season.

One player who appears to be going nowhere is Aubameyang.

The PA news agency understands an announcement over a new contract is imminent and Arteta moved to assure fans they do not need to worry about the length of time it has taken to confirm the deal.

“I think they can be pretty relaxed,” he said.

Arteta also dismissed suggestions fellow striker Alexandre Lacazette could depart this summer, adding: “He is really happy here. He wants to keep improving and contributing to the team.

“I know how good he is and the impact he is having. The way he has been training and conducting himself has been excellent.”

Despite having eight centre-backs in his squad, Arteta will have a selection headache of a different kind at Craven Cottage – with five of those options absent through injury.

Arteta could therefore look to hand debuts to either Gabriel or William Saliba, while Willian will be pushing to be included further forward.