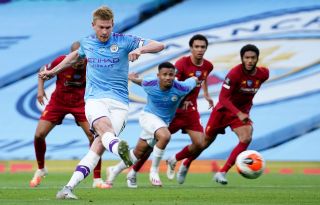 With the Fantasy Premier League season over, the top 1,000 can rest easy having secured their place among the game’s elite.

But how did they get there? The answer is that they relied on the right players for large parts of the season.

These were the men that the top 1000 invested in and stood by to achieve FPL acclaim.

Between them the pair scored 461 FPL points during the 2019-20 season, with a combined 17 goals and 38 assists, scoring bonus points no fewer than 28 times combined.

Both made for great captaincy options too, with De Bruyne hitting double figures in terms of FPL points on 10 separate occasions, and Trent doing so on seven occasions.

Backing both throughout the season was key to the top 1,000 finishing where they did.

Forwards who didn’t break the bank

The two aforementioned players were both expensive acquisitions, so where did the top managers save money? The answer lies up front.

Danny Ings, Raul Jimenez and Jamie Vardy were all selected regularly by the top 1,000 and all cost less than £10million despite their excellent returns.

Between them the trio managed 62 goals and 602 FPL points – to buy all three at the start of the season would have cost a combined total of £22.5m, less than a quarter of the original budget.

The trio missed just three league games between them this season also, giving their prospective managers assurance that they could be relied upon.

Brighton goalkeeper David Button was included in the eventual top 1000’s squads 40.7% of the time, but there’s a chance many football fans won’t have heard of the Seagulls’ stopper.

That would be entirely understandable as Button played zero minutes in the league this season, but his price proved appealing enough to many managers attempting to make the most of their budget.

Button cost just £4m at the start of the season, and finished it having fallen to £3.9m – as one of the cheapest players in the game, managers bought the goalkeeper and left him on the bench to free up funds elsewhere, choosing first-choice goalkeepers who were nailed-on number ones in their side.

If such a tactic worked for this year’s top 1,000, perhaps it could work for you next season too.