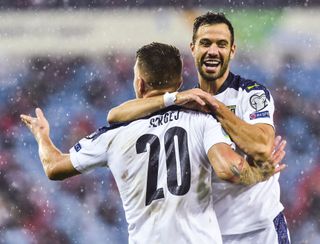 Scotland will play Serbia in their Euro 2020 play-off final.

Thursday’s penalty shoot-out triumph against Israel at Hampden set up a trip to Serbia on November 12.

Here is the lowdown on the team who stand in the way of Scotland’s first major finals appearance since 1998.

Route to the final

Serbia qualified with an impressive 2-1 victory in Norway on Thursday night. The visitors had almost double the amount of shots at goal as their fancied hosts and eight on target to three for Norway. Lazio midfielder Sergej Milinkovic-Savic came off the bench to hit a smartly-taken double to seal the win after an 88th-minute equaliser had taken the game into extra-time. Serbia finished behind Ukraine and Portugal in their Euro 2020 qualifying group, with 14 points from eight games. They failed to beat the top two teams and suffered a 5-0 thrashing in Ukraine.

The Serbs have quality throughout their team including skipper Aleksandar Kolarov, the 34-year-old former Manchester City and Roma defender who moved to Inter in the summer. Their midfield playmaker is Ajax captain Dusan Tadic, who contributed 34 goals and 19 assists during the Dutch club’s last full campaign, when they reached the Champions League semi-finals in 2019. Up front Fulham’s former Newcastle striker Aleksandar Mitrovic is the danger man, with 35 goals in 58 international appearances.

Ljubisa Tumbakovic was appointed in July 2019 in the wake of his predecessor being sacked following that 5-0 thrashing by Ukraine. Tumbakovic made his managerial name at Partizan Belgrade, leading them to six titles in nine seasons in charge. After spells in the Middle East and China, the 68-year-old was appointed Montenegro boss in 2016. He was sacked in June last year after refusing to attend his team’s European qualifier against Kosovo, whose independence is not recognised by the Serbian authorities. He only had three weeks out of work before his native country came calling.

Tumbakovic started off with a home defeat by Portugal before two wins over Luxembourg and a triumph against Lithuania were followed by a draw against Ukraine. Their latest Nations League campaign began last month with a 3-1 defeat in Russia followed by a goalless draw at home to Turkey. That was a rare clean sheet for the team – they conceded in all eight of their European qualifiers.