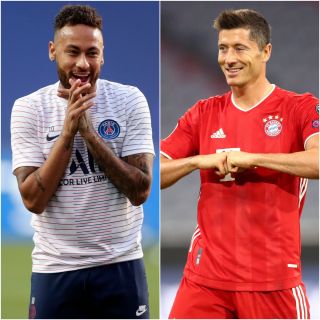 There will be plenty of star quality on show. Neymar, Kylian Mbappe and Robert Lewandowski are all considered among the world’s best players in two of Europe’s most free-scoring teams.

Here, the PA news agency takes a look at some of the key battles which could determine who lifts the trophy.

While the two forwards will not be in direct opposition on the pitch, what will matter is taking the chances when they arrive. No player has done that in this season’s Champions League better than Lewandowski. The Bayern striker has hit the back of the net 15 times in nine matches, including against both Barcelona and Lyon in Portugal, and has scored a remarkable 56 goals in all competitions. If the Poland international was to score a hat-trick in the final, he would break the Champions League goals record set by Cristiano Ronaldo in the 2013-14 season.

Neymar is no slouch himself. The world’s most expensive player has scored 19 times in an injury-hit campaign, making just 26 appearances. He spurned numerous chances in the two matches that saw PSG advance to the final, missing one-on-one opportunities against both Atalanta and RB Leipzig, while hitting the target just twice with 10 attempts in those games. The Brazilian can ill-afford to be so wasteful against this Bayern side.

Like his attacking partner Neymar, Mbappe has yet to score in Portugal. The French forward has struck five times in the Champions League and has 29 goals to his name in all competitions this season. He has terrific pace and is the ideal player to exploit some of the defensive frailties that both Barcelona and Lyon exposed against Bayern. The German champions have been playing a high defensive line and have been caught out without really being punished thus far in Lisbon. Alaba is quick but it remains to be seen if he has the sort of speed to keep up with Mbappe and he may require the assistance of ultra-fast full-back Alphonso Davies if Bayern are to effectively marshal the World Cup winner.

What happens down the right-hand side of the pitch on Sunday night will play a key role in the outcome. PSG saw the benefit of Di Maria against RB Leipzig as his mobility and willingness to track back helped them control the game. In his absence against Atalanta, when Idrissa Gueye played in midfield, the French champions were dominated in the middle of the park and on the back foot for large periods. Not only does Di Maria offer a threat in attack, highlighted by his goal in the semi-final, the Argentine will do his defensive duties and he might have to against Gnabry, who has scored three times in Portugal en route to the final. The game could be won or lost depending on who can push the other back more down that side and limit his opponent’s effectiveness going forward.

PSG will hope that first-choice goalkeeper Keylor Navas is fit. The Costa Rican missed out on his side’s 3-0 semi-final victory over RB Leipzig with a hamstring injury suffered against Atalanta, as Sergio Rico filled in between the sticks. Despite the Spaniard’s clean sheet and all-around solid performance, Navas remains the number one pick if he is fit and brings a wealth of experience having won the Champions League with Real Madrid in 2015–16, 2016–17 and 2017–18. However, Neuer is no novice, having also won the competition the last time Bayern were in the final in 2012 – two years before helping Germany win the World Cup. Neuer showed his importance with some vital saves against both Barcelona and Lyon and victory or failure could boil down to which goalkeeper is best on the night.