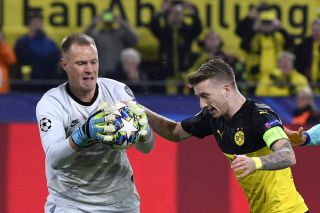 Barcelona goalkeeper Marc-Andre Ter Stegen’s double save from a penalty helped earn a 0-0 draw in their Champions League opener at Borussia Dortmund.

Just before the hour mark, the German produced a stunning stop at full stretch to deny countryman Marco Reus and then got up to calmly collect the bouncing rebound.

Replays, though, showed Ter Stegen had been off his line when the spot-kick was taken, but there was no video assistant referee review.

Barcelona brought Lionel Messi on for the closing stages, to replace 16-year-old Ansu Fati, for a first appearance of the new season.

However, the Argentina playmaker was not able to help conjure a goal, seeing a stoppage-time effort blocked.

Dortmund had earlier hit the crossbar through substitute Julian Brandt and but for some wayward finishing, as well as the heroics of Ter Stegen, could count themselves unfortunate to have to share the points from the Group F fixture.

Messi was named on the bench as he waited to make a first appearance of the new season following a calf problem, while 16-year-old Fati became the youngest Barcelona player to feature in the Champions League.

It was a cagey start to the first Champions League tie between the two sides, but Dortmund looked dangerous on the counter attack through Jadon Sancho.

Dortmund fashioned the first real opening in the 25th minute.

Thorgan Hazard picked out the run of Marco Reus into the Barcelona area, and Marc-Andre Ter Stegen had to come quickly to make a smart save.

England winger Sancho wasted a good opportunity to open the scoring after Dortmund broke quickly down the left through Paco Alcacer, who cut the ball back across.

However, Sancho could only guide his shot high and wide from 20 yards.

Barcelona were forced to make a change five minutes before half-time when full-back Jordi Alba went off with what looked like a hamstring problem to be replace by Sergi Roberto.

Dortmund keeper Roman Burki was called upon early in the second half when he saved from Luis Suarez’s angled drive at his near post before Alcacer sent a 20-yard free-kick into the Barcelona wall.

The home side were awarded a penalty in the 55th minute when Sancho was tripped by Nelson Semedo.

Captain Reus stepped up to take the spot-kick against his Germany team-mate – only for Ter Stegen to dive full length to his left to make a superb save and then jump up to grab the loose ball ahead of the Dortmund midfielder.

With 20 minutes left, the in-form Alcacer stabbed the ball over at the near post before Reus also fired off target.

Dortmund were denied when substitute Julian Brandt rattled the crossbar with a 25-yard drive and Ter Stegen saved twice from Reus at close range.

During stoppage time, Luis Suarez found Messi with a deep cross at the far post, but Thomas Delaney made the covering block.