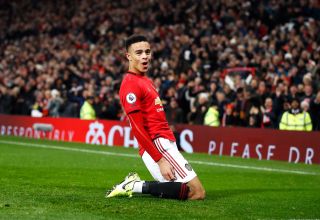 Mason Greenwood is dreaming of a record-breaking career after the Manchester United teenager’s stunning breakthrough season led to his maiden England call-up.

No teenager has ever scored more goals in a single campaign for the Old Trafford giants than the 18-year-old, whose 17-goal haul in all competitions put him level with George Best, Brian Kidd and Wayne Rooney.

Such performances saw Greenwood establish himself as part of Ole Gunnar Solskjaer’s first-choice attack, with his fine displays across the frontline leading Gareth Southgate to call him into the senior squad for the first time.

“It’s a dream come true,” Greenwood said. “Playing for England and being selected for England is every young boy’s dream.

“I’m privileged and I’m obviously honoured to be selected because it’s a good group of lads and I’m just happy to be here.

“I got the call, I was at home with my dad. I was over the moon, I was excited. I just couldn’t wait to be here.”

Greenwood said his father, as always, helped keep his feet on the ground after receiving the call from Southgate, but there is certainly no lack of confidence in his own ability.

The 18-year-old feels “ready to compete with anyone” and all-time record Premier League goalscorer Alan Shearer has already backed the forward to surpass his own 260-goal haul.

“Obviously any young football player would want to break records – and if you didn’t, there’s something wrong,” Greenwood said.

“It’s always nice to have visions and goals you set in your football career and that goes for virtually any England forward, really.

“Just go out there and do your best and break records and just be remembered forever, really.”

Greenwood has a way to go to outscore Shearer or United and England record scorer Wayne Rooney – another who has talked up the talented 18-year-old – while Solskjaer says he is the best finisher he has ever worked with.

“Ole’s a big part of my game, really,” the forward said of the United boss.

“Obviously he’s helped me to get where I am now and he’s given me the chances to prove to everyone what I can do.

“I am glad he’s there and he’s a good manager.

“Obviously he knows what he’s talking about because he has been a good goalscorer for Man United.

“When he’s talking to me I am always listening and always taking his advice on.”

Greenwood was spoken about as a generational talent throughout his rise through the ranks at United, where he made his debut off the bench in the miraculous Champions League comeback triumph at Paris St Germain.

“It gave me a lot of confidence because for him to put me on at that stage of the game showed he had confidence in me,” he said of that “special game” in March 2019.

“I was just glad he did because obviously it’s helped in my career now and things are more calm, smoother and I’m just used to all of it because the pressure was high in that game as you can tell – not just for me but everyone.”

One of the most impressive aspects of Greenwood’s game is his ability to hit the ball just emphatically with both feet.

Asked which he prefers, Greenwood said with a laugh: “I prefer to use any foot when it comes to me, but I prefer my left foot more than my right, really.

“When I was younger I put in a lot of practice into both feet and it’s stayed with me naturally now.

“I’m glad I did it at such a young age because it benefits me in my game.”

Greenwood’s assuredness on the ball matched that shown in his first ever press conference, even when faced with questions about the likes of Lionel Messi and Harry Maguire.

The 18-year-old also spoke about the Black Lives Matter movement and his expectation that England’s players will take a knee before the Nations League matches in Iceland and Denmark.

“Yeah, we will more or likely be doing that because it’s obviously a big thing,” Greenwood added. “Everybody notices it.

“Everyone notices it and a lot of people watch football so it will send a good message out there for everyone and, for my part, I’d like to see it next season as well, to stay there as well.”