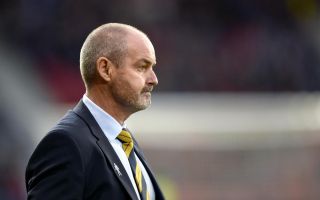 Scotland bid to revive their European Championship Group I campaign when they host Belgium on Monday.

Steve Clarke’s men are in desperate need of a result against the team that lead the FIFA world rankings.

Here are the main talking points ahead of the Hampden game.

Scotland’s shock opening defeat in Kazakhstan had already left them chasing unlikely results before Friday’s home defeat by Russia saw them slip six points adrift of their second-placed opponents. With the Russians looking to follow up their 4-0 away win over Kazakhstan in Kaliningrad while Scotland host Belgium, results on Monday could all but end the group campaign for Steve Clarke’s men. Falling nine points behind with four games left – with Russia already 17 goals better off – would make the mountain too steep to climb.

In the continuing absence of Leigh Griffiths, Scotland have tried Oli McBurnie, Oliver Burke, Callum Paterson, Marc McNulty and Eamonn Brophy up front during this campaign, but the latter four did not make this squad and Steven Naismith, who did, has been struggling with a hamstring problem. McBurnie was deprived of service for much of Friday’s defeat by Russia but did little to further his cause and Matt Phillips could push him for a start after joining him up front off the bench. Clarke has few other options although wide man Johnny Russell has played as a striker before and has nine MLS goals this year.

WATCH | @jmcginn7 scores his first Scotland goal to give us the lead at Hampden.#SCORUSpic.twitter.com/rpCHtaV8H1— Scotland National Team (@ScotlandNT) September 6, 2019

Skipper Andy Robertson felt nerves got hold of Scotland after they went ahead against Russia on Friday while manager Clarke was baffled as to why his players sat off after John McGinn’s early goal. The Scots conceded a string of chances after losing possession in the second half and they will likely be punished more severely by Belgium if they repeat that trait. Clarke will demand a more positive approach on the ball.

The centre of the park is Scotland’s strongest area on paper but McGinn, Scott McTominay and Callum McGregor were all sloppy in possession against Russia. Kenny McLean and Ryan Christie are pushing for starts after coming off the bench while Stuart Armstrong and Ryan Jack are also waiting for a nod.