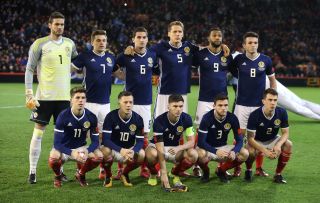 Scotland return to action following the coronavirus suspension when they take on Israel in Friday night’s Nations League Group B2 opener.

Here, the PA news agency takes a closer look at the big talking points ahead of the game.

The teams will walk out to a sleepy atmosphere with no fans there to roar on Scotland. Covid-19 restrictions mean the game will take place behind closed doors. The players should all be used to empty stands by now, but this will be their first experience of international football without an audience. However, given some of the paltry crowds we’ve seen at the National Stadium in recent years, the lockdown lull may not be too different.

How do you squeeze two world-class left backs into one side? It is an issue Clarke has not had to face until now because of Kieran Tierney’s recent injury problems, but the Arsenal left-back is finally fit and available to the Scotland boss. Skipper Andy Robertson is unlikely to vacate the No.3 jersey, so Tierney will be asked to shift. He is more than adept playing on the left of a back three, but if Clarke wants to play a four-man defence, then Tierney may need to have another go at right-back – a position where the then Celtic ace did not look too comfortable when Gordon Strachan experimented with it three years ago.

Lyndon Dykes has finally made a decision on which country to represent – and it could not come at a better time for Scotland. The Gold Coast-born frontman was faced with a choice between Australia or Scotland, thanks to his parents’ Dumfriesshire heritage. After a year-long courtship, the new £2million QPR signing has opted to declare for Clakre’s team, insisting he owes a debt to Scotland given the part the country played in his development at former clubs Queen of the South and Livingston. It is a massive boost for Clarke, who is without strikers Oli McBurnie and Leigh Griffiths for this week’s double header. Dykes should now nail his tartan colours to the mast on Friday night when he earns his first cap.

Friday night’s clash is the opening game in the new Nations League, a competition that could offer a back-door route to the 2022 World Cup in Qatar. But Scotland still have their participation in next summer’s delayed Euro 2020 finals to resolve. They host Israel again in next month’s play-off semi-final, so this week’s game will give Clarke and his players a useful early look at Willi Ruttensteiner’s team.