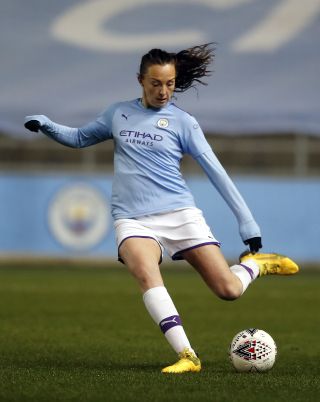 Caroline Weir believes Manchester City are ready to launch a renewed assault on the top prizes in the women’s game after an impressive summer of recruitment.

City were forced to settle for the runners-up spot in the Women’s Super League for a third successive year when last season was cut short due to the coronavirus pandemic.

The team had been top of the table when the campaign was halted but lost out to Chelsea when the title was decided on a points-per-game basis.

The club have responded powerfully by bringing in American World Cup-winning duo Sam Mewis and Rose Lavelle as well as England forward Chloe Kelly from Everton.

City midfielder Weir said: “To have players of that calibre come in is only a positive thing.

“The experience Sam and Rose are going to be bringing in, having won a World Cup and been so successful, is hugely important. It’s going to drive us on to the next level.

“Their strong mindset and winning mentality is what we need to reach where we want to go. It’s great to have players like that in the changing room and on the pitch.”

It has been a difficult year for the WSL, and women’s sport in general, but Weir feels the commitment of City’s owners to the team has shone through.

The 25-year-old Scotland international said: “I think we have always had such good backing from people at the club. As a player it has always felt like the women’s team is a huge priority.

“Year on year the club have upped their investment and are always looking to move to the next level. There is no doubt that’s happened in this off-season.

“As a player it means you can be in the best environment and test yourself and that’s where you want to be.”

The other notable change at City has seen Gareth Taylor take over as manager. The former City midfielder and Wales international has stepped up from the youth set-up to succeed Nick Cushing, who has moved to sister club New York City.

City launch the new campaign as they face champions Chelsea in a Community Shield double-header with the Liverpool and Arsenal men’s teams at Wembley on Saturday.

The matches will be played behind closed doors but Weir feels the occasion should give the women’s game some important exposure.

She said: “To have an occasion like this to kick things off is a huge thing. It’s great the FA have decided to do this and I think it’s what the game needs.

“It needs a big occasion to get people talking and watching women’s football again. As a player it’s hugely exciting to kick off the season at Wembley.”