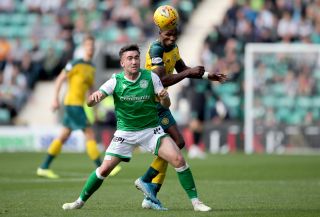 Stevie Mallan claimed nobody was going to stop him bagging his moment of glory after the Hibernian midfielder marked his first appearance of 2020 with a last-gasp winner.

Mallan came off the bench in Sunday’s Scottish Premiership encounter with St Johnstone and scored the only goal with a stoppage-time penalty.

The former St Mirren and Barnsley player had not played since Boxing Day and his comeback from knee surgery hit a setback which was further exacerbated by the lockdown.

So the 24-year-old was determined to make up for lost time when Hibs were awarded the late penalty.

“After a long road from my injury, to be able to get the winner in my first game of the season is a great feeling,” he told Hibs TV.

“It’s one of those, when you’re sitting in the gym every day, you want the accolade and the three points first and foremost.

“But it’s a great feeling personally because it’s been a long road and I’m finally back in.

“At the start of the season we said Kev Nisbet was going to be the penalty taker and he wasn’t there so as soon as I heard that whistle I just ran for the ball.

“Before Kev, I scored the last one at St Mirren so I had confidence that I was going to hit it. As soon as I grabbed that ball there was nobody taking it off me.”

The victory kept Hibs apace with Scottish Premiership leaders Rangers with 13 points from their opening five games. They have also kept three consecutive clean sheets and not conceded a goal from open play.

Mallan believes they are benefiting from time spent on the training ground during head coach Jack Ross’s first pre-season at the club.

“The manager wanted to have a pre-season with us to bed in the way he wanted to play,” Mallan said.

“After the lockdown we had a longer pre-season than usual and we worked through formations and the way we wanted to play and I think that helped massively for the squad, because we are going on the park knowing exactly what to do and what not to do as well.

“First and foremost he wanted more clean sheets because if you make yourself hard to beat then you won’t lose.

Hibs now face an in-form Aberdeen side on Sunday at Easter Road.

“We worked out where we wanted to be after six games and we are on track,” Mallan said.

“The manager is trying to breed a winning mentality throughout the squad and that’s exactly what we are doing.

“We are showing that on the pitch with the clean sheets and wins. We are doing well and we have to take that into Aberdeen next week.”