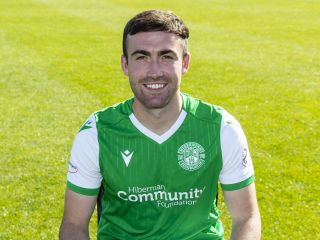 The ball was in the net three times in a frantic first half that due to infringements ended goalless although Callum Hendry’s header for Saints that was ruled offside should have stood.

Callum Davidson’s men had the better of the second period but could not get the breakthrough their play deserved.

Then in the dying seconds of normal time referee John Beaton awarded Hibs a penalty when Liam Gordon fouled Ryan Porteous and substitute Mallan thrashed in the spot-kick, with frustrated Liam Craig sent packing for picking up a second yellow card.

Hibs extended their unbeaten Premiership run to five games and went level on points with leaders Rangers although St Johnstone will feel aggrieved.

Hibs went into the game without injured top-scorer Kevin Nisbet, who was replaced by midfielder Scott Allan, while St Johnstone attacker Craig Conway came in for David Wotherspoon who dropped to the bench.

Saints survived an early scare. Martin Boyle’s powerful low drive after taking a Christian Doidge pass was tipped round the post by keeper Elliot Parish and referee Beaton ignored a penalty claim from the resultant corner when the ball appeared to hit Hendry on the elbow at close range.

The home side then got themselves involved in a frantic game.

Boyle had the ball in the net in the 28th minute after he had charged down an attempted clearance by Parish but the offside flag was already up.

At the other end, Hendry headed in a Conway cross but he too was deemed offside, although television pictures suggested Daryl Horgan had played him on.

Then, in the 32nd minute, Doidge netted at the second attempt from an Allan free-kick after Parish had saved his first effort but Beaton ruled handball on the striker.

Hendry and captain Jason Kerr flashed inviting deliveries across Hibs’ six-yard box at the start of the second half before visiting keeper Ofir Marciano stretched to tip a long-range drive from Danny McNamara over the bar for a corner that came to nothing.

The football was wholehearted rather than measured.

Former St Johnstone winger Drey Wright replaced Horgan on the hour mark, with Stevie May and Wotherspoon taking over from Conway and Hendry soon afterwards for Saints, who remained on top.

Mallan then replaced Allan to make his first appearance of the season following injury before Kerr headed a Craig free-kick across the goal but found no takers.

However, just as the match edged into added time, Hibs midfielder Alex Gogic struck the post with a header and when the home side failed to clear their lines, Beaton pointed to the spot when Porteous collapsed under Gordon and Mallan hammered the spot-kick past Parish, with Craig dismissed after the final whistle as he revealed his anger at his side’s unlucky defeat.