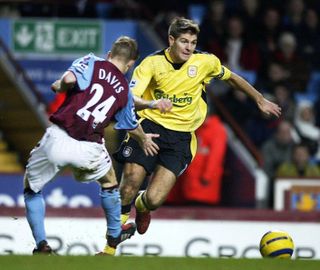 The 35-year-old has matched the benchmark of 119 appearances set by Pat Jennings after leading out Ian Baraclough’s line-up to face Norway in Monday night’s Nations League clash.

Captain Davis made his international debut in 2005 and it is no surprise to Gerrard that he is still going strong 15 years later.

The former Liverpool skipper knows Davis well, having gone toe to toe with him over the years in the Premier League.

And he was delighted to lure a man with three Scottish Premier League titles to his name back to Glasgow for a second spell with the Light Blues in January last year.

“I have got nothing but admiration for Steven,” Gerrard – himself capped 114 times by England – told BBC Radio Ulster’s Sportsound Extra Time show ahead of Monday’s clash at Windsor Park.

“It would be a magnificent achievement for him to equal the record. From someone who knows what you have to sacrifice to get to those sort of numbers, he deserves a lot of credit and all the plaudits that will come his way.

“It just goes to show the standards he sets himself on a daily basis. To still be performing at such a high level at his age, and to still have the hunger and desire to keep breaking these records is incredible.”

Davis can now set a new milestone if he keeps his place in Baraclough’s side for next month’s Euro 2020 play-off semi-final away to Bosnia-Herzegovina.

But he is guaranteed to play a major role this term for Rangers as they seek to put the breaks on Celtic’s bid for 10 in a row.

Alongside Ryan Jack, the former Aston Villa, Fulham and Southampton player has become a key man for Gerrard in midfield, and his club boss believes the wealth of experience Davis brings is crucial.

He said: “First and foremost, he’s a top human being. He’s a lovely lad who goes about his work in a professional way, so it would be fitting if he goes on and breaks it.

“From a selfish point of view, every manager gets nervous when their players go off on international duty, but he deserves it because of all the hard work he’s put in.

“He’s been extremely important, both on and off the pitch. He’s so low maintenance, he manages himself, really. He hadn’t played too much before he joined but once he settled in and got himself up to speed, his performances have been top class. He has been one of my most consistent performers.

“One of the major reasons I wanted to get him in was that I had experienced playing against him first hand. I had competed against him and got to know how he carries himself in battle. I knew what he was going to bring.

“I had obviously watched him up at Rangers before and knew that he could handle the crowd. There were a lot of advantages of bringing him in – it was a no-brainer for me to make it happen as soon as I could.

“With some signings you have to take certain risks, but I knew signing Steven had no risk attached at all. You speak to people around him and they tell you he is still in fantastic shape.”