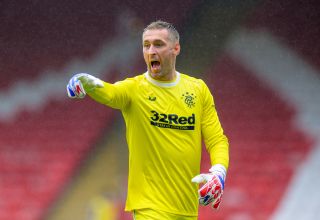 Allan McGregor is set to do battle with Jon McLaughlin for the Rangers number one slot after rejoining Steven Gerrard’s squad ahead of Kilmarnock’s Ibrox visit on Saturday.

McGregor has missed the recent clashes with St Mirren, St Johnstone and Livingston with a knock but will now go head to head with rival McLaughlin for a starting slot against Killie.

Leon Balogun (quad) and Joe Aribo (ankle) remain out but could feature against Hamilton next week while Jermain Defoe (hamstring) is unlikely to be ready for a return until next month.

But boss Alex Dyer has no fresh injuries ahead of the clash as his side go in search of their first win this season.

Only goalkeeper Jake Eastwood remains out with a thigh problem.