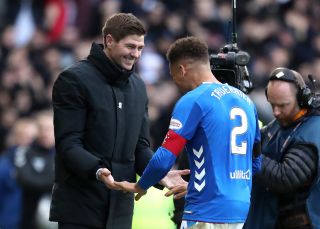 The Ibrox captain was named Scottish Premiership’s player of the month for September after extending his incredible scoring streak to seven goals in seven games.

It has been a remarkable return to form for a player who found himself the target of supporter frustration as the wheels came off Gers’ title charge in the weeks after last season’s winter break.

Gerrard reckons the right-back is looking stronger than ever. But he now wants Tavernier to prove this hot streak is no flash in the pan as he urged his fellow Englishman to continue putting on those impressive displays all the way to May.

Gerrard said: “Tav has come back really hungry with a real strong pre-season under his belt. Physically he is looking like the powerhouse we know he can be.

“He is playing with confidence and a smile on his face. He is certainly back to his best and I think he’s got stronger as each game has gone by.

“But I think it is his application and approach that has really impressed, right from returning on June 15.

“The challenge for Tav is that he has set a standard and he needs to try and maintain it for the rest of the season.

“But he certainly deserves the accolade. He has been really consistent this month.”

Rangers have answered Gerrard’s demand for more ruthlessness this season, blasting 33 goals in their first 12 games of the campaign.

A key component of that attacking intent has been the twin threats provided by Tavernier and Borna Barisic from the full-back positions. That was illustrated again during Thursday’s Europa League triumph over Galatasaray as left-back Barisic threw over the cross from which right-sided counterpart Tavernier headed home the winning goal.

Gerrard is wary of drawing the same conclusion but he was certainly not underplaying the importance of his own all-action pair.

“I don’t think we are at a stage yet where we can be comparing ourselves to Liverpool or Trent and Robbo, that’s for sure,” said the former Liverpool captain.

“Thursday’s was a wonderful goal and it is a big part in terms of how we play. We do have two bold, really attacking full-backs who have got amazing quality in the final third.

“It would be really naive of us as a team and a club not to try and utilise those two players.

“But we want to give them freedom, we want them to play with belief and back themselves in the final third.

“They have contributed big numbers to the team so far this season and long may that continue.

“We have also shown that we can play with them a bit flatter and play with wide men out there as well so it is nice to have different options as a manager.

“They are both in really good form at the moment.”

Having ensured Ibrox will host group-stage action for the third year running with their victory over Fatih Terim’s Turkish giants, Gers now return to league duty.

Victory over Ross County on Sunday will mean they top the table ahead of facing the champions at Celtic Park after the international break.

But Gerrard said: “I think we just focus on the next challenge, which is Ross County.

“The league is the league, we want to stay top for as long as we can but no-one will be getting carried away however the table looks after the game on Sunday.”