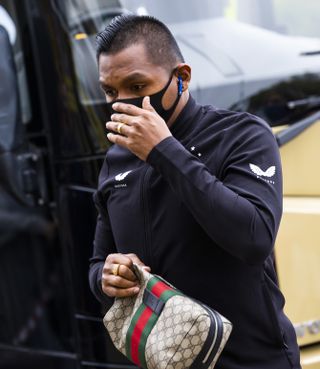 Steven Gerrard has suggested it will be down to Alfredo Morelos and his agent to decide if he has a long-term future at Rangers.

The Lille target has been at the centre of an on-off transfer drama all summer but as of yet, no one has met Gers’ £20million asking price.

Gerrard criticised the Colombian’s focus earlier this season, accusing Morelos of having his head turned by the interest from France.

But the Ibrox boss was delighted to see the 24-year-old looking more like his old self on Thursday as he scored twice in their 5-0 win over Lincoln Red Imps.

However, Gerrard admits he has no idea what the future holds for his top scorer.

Morelos’ agent Michael Gorman was in Glasgow this week for talks with his client as speculation continues to swirl and Gerrard would be interested to know what was discussed.

Asked if he believed Morelos would still be a Rangers player once the transfer window shuts next month, he said: “Of course there is still a possibility because no one knows what’s going to happen in the coming days and weeks.

“I said a few weeks back that in my situation you just take each day as it comes.

“I think that’s a question for Alfredo and his representation to answer, rather than myself.”

Morelos was back in action just five days after suffering a nasty gash in a clash with Dundee United defender Ryan Edwards.

But the stitches in his knee did little to slow a player who now needs just one more goal to equal Ally McCoist’s European scoring record of 21 for Rangers.

And Gerrard was pleased to see the surly striker smiling again.

Speaking ahead of Sunday’s trip to Hibernian, he said: “I think that is a great visual for me all the time, when I see him smiling, enjoying his football and in good shape.

“He is a fantastic goalscorer. His goals were different but they were two fantastic finishes. In the right place at the right time for the first one, which you don’t coach.

“You are born with that when you sniff those goals out and the second goal, he shows his class and his touch.

“But even before a ball was kicked, even just to make himself available, he is very robust and, as a manager, he is always there for you.

“A lot of players wouldn’t have come through with what he had from the weekend so I am really pleased for him and it is great to see him smiling.

“I think he has a really good rapport with the players when he is out there on the pitch. He seems a lot happier in the last few weeks.”

Steven Gerrard lauded a ‘professional job done’ by Rangers as they set up a @EuropaLeague third qualifying round tie with Dutch side @WillemII next week.— Rangers Football Club (@RangersFC) September 17, 2020

Victory in Gibraltar has teed up a trip to Holland to face Willem II next week but first Gerrard’s Premiership leaders must take care of business at Easter Road.

Only Rangers and Celtic have scored more goals than Jack Ross’ team this term but Gerrard will not contemplate parking the bus in Leith.

“They do play a bold, attacking game and we will have to see what we come up against,” he said.

“My focus is on Rangers and what we produce on the day and we are going to go there and be on the front foot and be aggressive and bold. From where I sit it’s going to be a case of can Hibs stop us.

“We’re not going to Easter Road to set up defensively or to play for a draw. We’re going there to win the game.”