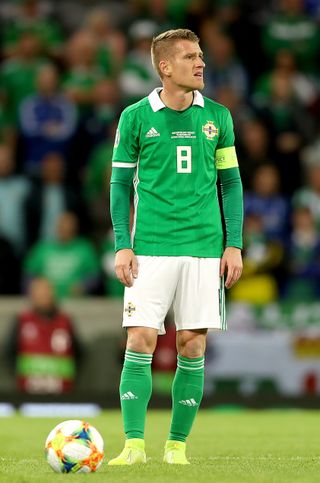 Steven Davis is not planning on hanging up his boots any time soon as he stands ready to match Pat Jennings’ caps record with Northern Ireland on Monday night.

The 35-year-old will make his 119th international appearance when Northern Ireland face Norway at Windsor Park in the Nations League, moving him level with the goalkeeping great whose international career spanned more than two decades between 1964 and 1986.

“It’s hard for me to sum up in words,” the Rangers midfielder said. “There’s been a lot of hard work, dedication, sacrifices, I’ve made to get to this point.

“Every time I pull on the jersey, it’s a really proud moment for me. I could never say it was an aim to get to this point and I’ve been fortunate to have a long international career.

“To match an icon for me and family like Pat is something I will be able to look back on more when I finish playing and be delighted with.”

Asked when that day might come, Davis said he will continue to take each season as it comes with no desire to walk away from the game yet.

“That’s the approach I’ve taken last year, this year,” he said. “I just want to enjoy my football and the here and now and hopefully I’ll still be OK physically when the end of the season comes.

“That’s the approach you’ve got to take and I learnt that from Aaron Hughes and Gareth McAuley, who played until their late 30s, great examples for me to follow.”

Davis has made himself a staple of the Northern Ireland side over the past 15 years, and his influence has been hugely appreciated by new manager Ian Baraclough.

“There are not enough words to be able to describe his achievement,” Baraclough said. “It shows a career of dedication. He prepares properly for every training session. People don’t see that behind the scenes and that sets you up to have a career like Steven has had.

“He’s a shining light to the younger lads and I always mentioned him in conversations with my under-21s when I was there. If they go and apply themselves right, it gives them a chance to have a career like Davo’s.

“He’s not finished yet, so don’t be finishing him off by any means. Hopefully he can lead us to the Euros and bigger things in World Cups, but that’s way down the line. It’s great to have him as our captain and leader. Like I say, not enough words.”

While Davis’ name can already be inscribed on Monday’s team-sheet, Baraclough expects to make a number of changes from Friday’s draining 1-1 draw against Romania, in which Northern Ireland played more than half the night with 10 men after Josh Magennis saw red before the break.

Magennis is therefore suspended while Jordan Jones and Matty Kennedy will return to their clubs with knocks, but Jonny Evans will be available again after not travelling to Bucharest for personal reasons.

The Leicester man’s experience could be crucial against a Norway side boasting the likes of Erling Haaland and Joshua King in attack, though Baraclough insisted his return was not a given after Daniel Ballard’s impressive debut in his place.

Ballard had been due to be playing with the under-21s this week, but the withdrawals of Tom Flanagan and Evans fast-tracked his debut at the age of 20.

Davis was the same age when he made his own debut, and Baraclough hopes his example can inspire the next generation.

“There are players who will have the aspirations to (match his record),” he said. “But I can see Davo stretching it even further and taking it out of sight.

“It’s a fantastic achievement. I can’t say enough words about the fella. The way he has led the country and led the troops is an example to everyone.”