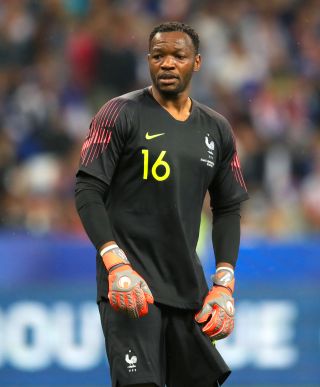 French goalkeeper Steve Mandanda has tested positive for Covid-19 and will miss his side’s Nations League games against Sweden and Croatia.

The Marseille captain underwent a test along with the other members of the French squad on Wednesday and returned a positive result.

The World Cup winners are due to face Sweden in Solna on Saturday night and then play Croatia at the Stade de France on Tuesday.

Steve Mandanda will miss the games against Sweden and Croatia after he tested positive for COVID-19. pic.twitter.com/LIoRdw3mlB— French Team ⭐⭐ (@FrenchTeam) September 3, 2020

“As per the Uefa rules, the entire French delegation underwent tests on Wednesday at Clairefontaine in view of the trip to Sweden for the Nations League match this Saturday,” the French Football Federation said.

“The test of Steve Mandanda was positive for coronavirus, the goalkeeper underwent a second test in the same day. This was also positive. Steve Mandanda cannot therefore take part in the match against Sweden and will leave the group on Friday.”

Mandanda, capped 32 times, was part of the France squad that came second at Euro 2016 on home soil and won the World Cup in Russia.